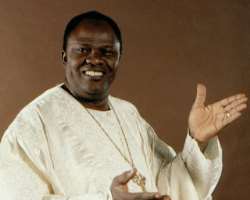 I read with interest the recent tirade of Catholic Archbishop of Lagos, Anthony Okogie against the late Benson Idahosa and his Pentecostal brethren. Okogie did not mince words in his blunt appraisal of the late archbishop, equating his charismatic 'prosperity-preaching' to plain deception of the gullible and susceptible in the name of Christianity. “Idahosa used to say 'if your Jesus is poor, my Jesus is rich.' People like Idahosa don't think about suffering but how to live the best. They used the gospel to deceive the people, and we have people following him,” he said during the commissioning of newly trained Catholic Evangelisers of the Antioch School of Evangelisation at Holy Family Catholic Church, Festac Town, Lagos (See Sunday Champion - 19th July 2009).

The accusations are strong - misinterpretation of the Bible and subsequent deception of the masses with erroneous doctrine, preached more for the intention of personal gain and fame, with little consideration for the people's physical and spiritual welfare. And this is in reference to the man collectively considered the mentor of the Pentecostal 'giants' today – the likes of Adeboye, Oyedepo, Oritsejafor, Okonkwo, Okotie and Adefarasin inclusive.

In keeping with Okogie's outburst, I received a response to one of my recent write-ups from a disgruntled fellow who candidly bemoaned the state Pentecostal Christianity in Nigeria has fallen to. “I spent 10 years running from Christ Embassy to Latter Rain to Redeemed, only to discover that the self professed men-of-God are nothing but religious bandits”, Mr. Okeke wrote. “Their job is to milk the gullible hungry Nigerians by laying hands, evoking false hope and selling “claim it” miracles. With the other hand, they take money from 419ers, corrupt government officials and overnight millionaires. They certify and glorify these criminals by association, membership and selling them special seats around the altar. In the name of expanding the gospel or planting churches (as it is popularly called), they send out ill prepared jobless men as pastors to every nook and cranny of Nigeria to fool and deceive people. They have perfected the means of quoting the Bible to suit their extortionate purposes, as if Nigerians are too retarded to read and understand the simple language of the Bible. Most of these pastors strictly depend on the contributions of their over-burdened members to live out their luxurious and extravagant lifestyles. Their wives automatically become assistant pastors, bishops or 'Mama G.O'. God asked us to bring our tithes and offerings to His house in order for meat to be available in His house, not for the pastors to dress up in Gucci and ride in Hummers displaying their wives ill gotten jewelleries with bodyguards and police officers.”

Although strongly opinionated, the points made display distressing proximity to reality. Many ministers of God in Nigeria seem to have drifted from their divine duty and distorted their actual assignment – being the hands and feet of Jesus to the lost and broken hearted. Kingdom business has been reduced to worldly commerce; the pulpit of peace has turned to a podium of dissension. I recall that Idahosa himself was the instigator of various crusades in Tafewa Balewa Square, Lagos, where thousands of Nigerians unanimously prayed for the destruction of Pastor T.B. Joshua and dissolution of his 'Synagogue of Satan.' The prayers appear to have had an opposite effect with the increasing repute and worldwide demand for Joshua and his ministry.

However, it would be foolish to underestimate the power of religion as a potential catalyst of positive change in Nigeria. I mean, our pastors are almost akin to English footballers in terms of acclaim and esteem. They wield such stupendous authority in the socio-economic sphere that one was recently voted Nigeria's 'Greatest living legend' notwithstanding the fact that he regularly socializes with an ex-president embroiled in allegations of corruption and a governor enmeshed in accusations of diabolic practices. Nigeria can lay claim to the world's largest church auditorium, the biggest gathering of Christians in a single event and the designation of the 'most religious nation', yet we are among the most mismanaged, corrupt and poverty-stricken people on earth. Can this be considered a mere irony, or indicative of our pastor's abuse of privilege and promise? Can such change come when clerics continue to drift from their divine cause and course for the sake of temporal treasures and pleasures?

Nonetheless, judgement is not a function allotted to us mortals during our brief stay here. The Bible has made unequivocally clear the universal assignment Jesus specified to His servants, and the accounting they will all stand to give thereof. He said in Matthew 25:45: “Whatsoever you do [or fail to do] to the least of my brothers - that you do unto me.” In other words, Jesus was simply saying: 'I have no farm where I expect you to work for me, or an office where I expect you to help me in checking files. My farm and office are your fellow brothers. Whatever help you render to the least of them, whatever problem you help someone else to solve, that you render unto Me.'

It is time the Pentecostal Church realised that the verification of a fruitful ministry stands not in the number of people who attend your crusades, the number of branches your church has or the worldly belongings you possess – but rather the problems you have solved, the needs you have met and the lives you have improved. We are called to live a life of investment, not expenditure. All the resources within and around must be passionately channelled towards these charitable purposes.

Just consider how many despondent students could receive quality education if church-tithes were used for scholarship schemes? Consider how many beggars could be taken off the street if church offerings were translated to capital for job creation? Consider how much joy could be restored to the hopeless and homeless if church members were taught to spend more on others and less on themselves, and their pastors led by such example? If frustrated youths were encouraged instead of used and misled – imagine the reduction in street crime, prostitution and cultist activities on campuses? If Christians chose to show love beyond tribe and faith, imagine the diminution in religious and ethnic tension. If blind condemnation was replaced by constructive criticism, imagine the lessons that would be learned instead of pointless battles fought. This, coupled with spiritual guidance, godly principles and practical compassion, has the potential of producing change in the Nigerian atmosphere and attitude.

Our pastors need to imbibe the principles of the late Mother Teresa who gave her entire life, wealth and worth to the poor in India. She poignantly said, "When a poor person dies of hunger, it has not happened because God did not take care of him or her. It has happened because neither you nor I wanted to give that person what he or she needed. We have refused to be instruments of love in the hands of God to give the poor a piece of bread, to offer them a dress with which to ward off the cold. It has happened because we did not recognize Christ when, once more, he appeared under the guise of pain, identified with a man numb from the cold, dying of hunger, when he came in a lonely human being, in a lost child in search of a home.” A stark contrast to the Pentecostal message, “If you are not a giver today, you shall be a beggar tomorrow.”