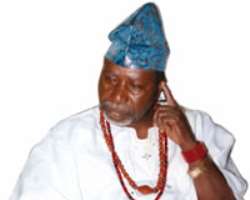 Chief Jimoh Aliu is arguably a legend in the theatre world and a guru in the film industry. In his career which dates back to several years, he has traversed the length and breadth of the country and has won accolades in various parts of the world. Moerover, this illustrous Yoruba son has stamped his authority in publishing. In view of this, Chief Aliu has completed work on a book entitled: Ojulowo Itan Ogun Ekiti Parapo. In this chat with GBENGA OLUMIDE, he bares his mind on the effort. Excerpts:

W hy did you embark on this project?
Well, I consider it imperative to go into the publish ing of this book because of two reasons. One, the story has a historical importance to the Yoruba nation, as it dealt with a war of unification, which ended all wars in the land. Two, it is in furtherance of my role as a custodian of Yoruba culture and tradition which is sancrosanct, and I want to protect and preserve it.

There had been many angles to the story before your project. How do you see this?
That actually informed my resolve to come up with this project. A war that is very strategic and important to the Yoruba nation cannot, and must not be bastardised. In this project, we conducted a research through the families of the people that participated in the war and they endorsed the project.

What makes your own version different?
As I said, all the families and personalities that participated actively in the war were contacted and facts were gathered from them. They have authenticated this project and they are willing to corroborate it anywhere, any day.

How can you butress your claim?
This project is more of a research work than a mere story writing, and everything is well documented.

Why do you use Yoruba as the medium of expression for this book?
We did this to make it available to all and sundry, particularly people at the grassroots. And we made use of modern Yoruba which makes it useful for our children in secondary schools in all Yoruba-speaking states.

The story is all about Ekiti. Isn't it?
That is far from the truth. It concerns all the major towns and cities of the states in Yorubaland — Lagos, Oyo, Osun, Ogun, Ondo and Ekiti. All these areas and states played major roles in the historic war and that makes it expedient for indigenes of the states to know the roles played by their forefathers and leaders in the unification of the Yoruba nation. The book will, no doubt, give them first-hand information which they never have before: The authentic facts!

Who are the target audience for the book?
It is meant for all Yoruba sons and daughters in the diaspora. It is also useful for secondary school students, the elite and students of History. We need to have first-hand information about our past leaders and events.

Who are the principal characters in the book?
We have Fabunmi, Latoosa, Ogunmola, Ogedengbe and prominent Yoruba obas. More importantly, this book has succeeded in bringing forth some facts about these characters in the historical war. Note that it was Yoruba war, and not Ekiti war. This is important.

How far did you go in detailing their acitivities?
This is why the book is a must-read for all Yoruba in the diaspora. We have compehensively dealt with the activities of all the actors in the war in such a way that the indigenes of their respective communities need to know, and they are hard facts.

Do you have any different or special thing to say about those characters?
I have said it. This is a research work. If we have not done anything special or spectacular on the role of these characters, then there is no basis for our efforts. We have done what all sons and daughters of Oduduwa will be proud of.

Was Kiriji war truly the war that ended all wars in Yorubaland?
Absolutely. It was a war that put an end to all manners of wars and semblance of wars in Yorubaland. It is a war that restored the dignity of certain parts of Yorubaland. It is a war that exposed some personalities in Yorubaland. However, Yoruba sons and daughters have been fed with funny stories about their past heroes and some of these heroes have (also) been wrongly deified. We have corrected all these distortions and put the record straight. It will interest you to know the historic role that Lagos played in resolving this historic war and not much has been heard about their role. All these and many more facts are contained in this historic book. This is why this project (book) is important and essential for the entire Yoruba, including those in the diaspora.

Is there any arrangement on ground to make it accessible to all the target audience?
Well, within our capacity, we intend to print a reasonable quantity, at least to ward off piracy. Equally, we intend to reach out to governments in all Yoruba states to make copies available to the citizens, particularly students who must know the facts about their past leaders.