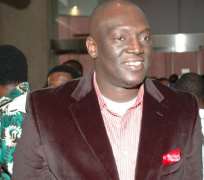 Samuel Okposo's parents brought him up in the way of the Lord and wanted him to be an accountant. He, however chose to do music but kept faith with his maker. From producing soundtracks for movies, he branched out to become a gospel artiste. With hit albums like Wellu Wellu and Addicted, Sammie has won awards others can only dream of. If there were an award for the gospel musician romantically linked with the highest number of women, he would win that too. Reporter, Gbenga Bada, recently got him talking about his relationship with women, love for gospel music and his father's influence on his life.

What would you say is the major influence on your personality?

My father. He really influenced my personality and I would say he's my role model. I grew up in a family where excuses are no options. We don't use the word 'can't' in my house; it can always be done. No is not an option in my father's house, and that has shaped and moulded me into what I am today. I don't know how to cut corners and I don't even try cutting corners, I believe I'm wonderfully made and peculiar as my own person.

So, how did music come in?

Music was identified in me when I was just nine years old. I got a battery-powered piano from the Sunday school teacher called Mr. Edward. The man was able to explain to my parents that I was gifted. While I was growing up, I had to sneak out of the house for music lessons because in those days, you were not allowed to choose music, acting or modelling as a career. My father had a career for all his children and for me it was accountancy. But then, he didn't even find out my interest or capability to be able to do what he had chosen for me. It was okay for me to sing in the church because he was an elder there while my mother was a deaconess, but that is where it ended. Outside that, I was meant to be an accountant. I was already admitted into the university and I was in year two when I decided music was what gave me joy. I approached my father, though I knew it wasn't going to be easy but I went ahead, and told him that I wanted to go for music and he said, 'okay, you can go ahead.' But he let me know he wasn't going to foot the bill 'except if you decide to go back to study accountancy.'

It was then I decided to move to Lagos, where it was happening. When I got to Lagos, it was hard, I mean that was when I was squatting with several boys and all I could get despite the hunger was a square meal to move on with life. There were times I had wanted to go back to my father but something just kept telling me to move on. Thank God it paid off and today I am where I am.

What is the biggest thing music has fetched you?

The awards are what many thought was the biggest thing music had gotten me. In fact, many people had thought that was just the biggest thing but today I'm bold to tell people that the biggest thing that ever happened to my music career isn't even my Kora Awards or AMEN Awards or what have you, but an got that award before my father died. He called me into his house and said, 'Sammie, today, I'm happy and proud of you. I look at you now and I'm glad that I was not able to force you to become an accountant because seeing you now, I know I would have forced you to do something that was not part of God's plan for you. I look at you and I know that you are a fulfilled man.'

That, for me, is the biggest thing or award that I have gotten and which would continue to be the biggest till I leave planet Earth. This is because I was almost disowned because of this music by this same man.

You started with movie soundtracks before releasing albums, why have you decided to let go off soundtracks and just release albums only?

I stopped initially for sometime because I needed to concentrate on the completion of my albums and becoming an artiste. I did not want to be distracted and secondly, some of the movie directors and producers have bastardised the whole thing, whereby the producer or director wants to dictate to you what you should sing about or tell you that you must call the name of the film in the soundtrack. Because of that I left but after then I have done a few soundtracks for some films like Jeta Amata's Amazing Grace. The truth is even now, I watch who I work with because my name is at stake. I don't want my hard earned name tarnished because of one unprofessional script or movie. I screen every script I have to work on before embarking on such a movie's soundtrack.

Would it be true saying the financial gains isn't that much and that was the main reason behind your reason to concentrate on your albums?

Well, the money determines some of the jobs I do but sometimes, if they can't pay, and I feel the script or the movie is worth what I can invest my talent on, I still go ahead and invest in it.

I have always had a soft spot for the gospel genre of music. Like I told you, my talent was discovered and nurtured in the Lord's vineyard and there would I remain to sing unto Him till I can sing no more. I don't intend to leave my gospel background for anything I have had several offers from several people even outside the country to do something aside gospel because of my voice but I refused and would continue to refuse because all I set out to do is gospel music. What many people do not understand is that it is only in the gospel genre of music that you can infuse any other kind of genre and still remain gospel. My friend Kirk Franklin once told me while we were chatting that some churches rejected him because of his kind of gospel music but now, these set of churches are now running after him booking sessions with him to come to their church among other things. So, this is what I have set out to do and what I would continually do.

There is sure a difference between the Sammie Okposos because I'm a different person on stage. When I'm up there the spirit of music takes over me and when I come down, I return to my person. There's a lot of difference between those two people and I have often found myself in a situation where people talk about me and say, 'how can a gospel artiste behave this way?' But I tell them that I am not a priest, I am only a gospel artiste and I am human. Even pastors are meant to have their own human side because what they have that is different from every other person is that title. Failings, misbehaving are part of why we are humans. I have found myself where I have been castigated. There have been different expectations of people from me because I'm a gospel artiste but I have different mindset of a gospel artiste. For some, I have lived up to what I'm expected of while for some, I have not. So, it's a daily balance and I never forget myself because I don't live for people since I have found out that if you live for people, you will end up with a lot of breakdowns. Some people think I'm too funky or that it's not gospel music (I play) but over the years I have made people understand that gospel music should not be sang only at funerals. This is because gospel is good news and good news is not only restricted to some set of people but for everybody since it's preaching salvation and goodness of the Lord. In all, I have an idea of what gospel music should be and the kind of life that I should live as a gospel artiste regardless of what anybody out there thinks.

You have been romantically linked with several women and many wonder how a gospel artiste can be linked with these many women in the society?

Yes, I've been linked with several women but it should be noted that I'm not a priest. I never said I was a priest and as such there is a big difference between me and a priest because it is only priests that take vows and consecrate themselves not to have anything to do with women. But for me, the good thing about me being linked with these women is that these were times when I was an adult. I was not underage and I was old enough to have a relationship and have a lady in my life. There is nothing wrong with a gospel artiste having a girlfriend. Every linking was when I was over 21 and at that time, if I had decided to get married, I didn't need my parent's consent because I was an adult. You see, people talk so much about my relationships because I don't hide them; it's not something that I do in the dark. If this is the person I'm dating at the moment, you will see me at events with the person. And I won't say because I'm a gospel artiste and my relationship with the lady didn't work out, I should put my life on pause while she moves on, it's not going to happen. I move on and at some point find somebody else. When I get to that stage of tying the knot and it works out for me to take it to the next stage, I will do it without hesitation and you will definitely get an invitation card. I need to know, go out with and fellowship with any woman that I would be getting married to. I'm sure if it had been a vulcaniser down the road, nobody would have noticed but because it is Sammie, everybody talks about it. But I'm used to it because I know that is the price I pay for being where I'm today, my life is now a public discourse and I'm not complaining.

What's the relationship between yourself and the mother of your child?

What about your daughter?

She's fine. She's doing great and we have the best relationship you can think of. The type you would expect between a father and daughter.

How often do you see her since she doesn't live with you?

Well, I don't see her often because she lives and schools in England but whenever she's at home, I see her and whenever I'm outside of the country, we stay together and we reminisce on our last discussion. We are so close that we call each other everyday, e-mail, send text messages and communicate often because of the distance and she's fast turning into a lady. We have a good relationship and we communicate often. My daughter is 13 by the way.

Age is fast catching up on you. How soon do you see yourself getting married?

At the right time I would tie the knot. It is about what you do, how you do it and how well you are able to connect with that person. I have had friends who have been married for two years, 10 years and what have you and I also have some who married and the marriage didn't even last two years. So, at the right time, I would get married.