MASSACRE: FAMILY OF 8 WIPED OUT IN JOS 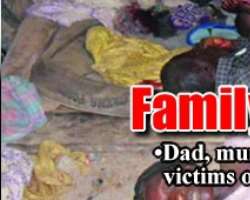 Fulani herdsmen were on the rampage again yesterday, as another family of eight was massacred in Heipang, near Jos, the Plateau State capital. This time, Mr. Chollom Gyang, his wife, Hannatu and six children, including a four-month old baby fell victims.

Just a week ago, eight members of a family were murdered by Fulani herdsmen. The Chairman of Barkin Ladi Local Government area, Mr. Emmanuel Dachollom, had reported the incident to the Federal Government. He said that the attackers came from Mahangar, a Fulani community. According to him, if the federal authorities had acted on his alarm, the latest incident would have been averted.

Our correspondent, who visited the house of the late Mr. Gyang, observed that some of the victims had deep machete cuts all over their bodies while others suffered gunshot injuries. Mr. Dachollom said: 'We have made appeals to the Federal Government; we have told them that the people in the area (Mahangar) have lots of sophisticated weapons, but government has refused to do anything about it.

'I personally complained to a Federal Government delegation that came to investigate the killing last month, of eight members of another family, but our concerns and fears have been ignored.' He said that the military Special Task Force (STF) recently searched a house in Mahangar and recovered sophisticated weapons, but that they did not have the will to search the whole community. Dachollom warned that unless the weapons in the area were mopped up, they would continue to constitute threats to the communities.

'Now, our people have been pushed to the wall. We have been appealing to them to be calm and not take the laws into their hands. We do not know for how long we can wait for government to protect us.

'If our youths go on the rampage, nobody should blame us; we have asked them to constitute themselves into vigilance groups to defend themselves against aggressors,' he said.

Mr. Gyang Fulani, a member representing the area in the House of Assembly, said that the people could no longer trust government to protect them as it had failed them with the constant attacks. He regretted that the security personnel had not been able to fish out the attackers as no single arrest had been made, accusing the STF of lacking the will to stop the Jos crisis.'We said few years ago that terrorists were in the country but government didn't take us serious.

Now, it is glaring from the security challenges all over the country.

'The terrorists in Plateau are easy to fight because they are known, but government is complacent about confronting these fundamentalists. It is a ticking time bomb that will soon explode,'' Fulani said.

He challenged the people of his constituency to now rise up to the security threats and defend themselves against the aggressors at all cost.

'We will never calm the youths again; we will allow them rise up to protect their communities and their land from these unprovoked attacks.'We now know who the aggressors are. When police advised Izala sect leader, Sani Jingir, not to go to Rukuba Road for the Sallah prayer, he refused and had now put the whole Jos into crisis,'' he stated.

Mr. Francis Jamang, National President, Berom Youth Movement, said the situation had reached a stage where they might be forced to take the laws into their hands if their attackers were not brought to book.

'The Berom people have now been pushed to the wall; no one should blame us for whatever action we take,' he said.

Meanwhile, the state government has condemned the new wave of killings and tasked the communities to be at alert so as to defend themselves against aggressors. The Commissioner for Information, Mr. Abraham Yiljap, told newsmen that government was sad that violence had continued in spite of efforts to restore peace.'No matter the number of military and police personnel, they are not enough to protect everyone. So, government is calling on community and religious leaders and politicians to enlighten their people to help themselves.

'Arrangements should be made to protect the people; let people take measures to safeguard lives and property in every community,' he said. Yiljap, however, tasked the various community and ethnic groups to adopt dialogue, saying that dialogue still remained the best solution to the lingering crisis. Police Commissioner Emmanuel Ayeni, could not be reached for comments while the command's spokesman, Apev Jacob, could not comment on the development.

Capt. Charles Ekeocha, the STF's spokesman, in his reaction to the attacks, said that the STF had no business with the area. He explained that the task force withdrew its men after the communities in the area said they did not want them. He said: 'The security of that area is not the concern of the STF; they have said that we are responsible for the attacks.'In fact, officials from the Army headquarters came and investigated the claims of the communities and we are still awaiting the outcome of their findings.

'They have always accused our men of the attacks, so, I do not know who could have attacked them now that our men have been withdrawn.'' Reminded that the STF is in charge of security in the entire Plateau, Ekeocha agreed, but quickly added that soldiers were not in charge of that specific area as they had been accused of masterminding the attacks over time.

'There was even a time they claimed to have picked military ID cards at the scene of such attacks. So, we are out of their area. I suggest you contact the police security team, Operation Rainbow,'' he said.

Meanwhile, angered by rampant shooting of its men, STF had mandated soldiers to shoot on sight, any one carrying or using arms on others.

'The STF is now mandated to use all the necessary force within its powers on anybody carrying and using arms or dangerous weapons on another person,' its spokesman said. Capt Ekeocha, in a statement in Jos on Sunday, warned the youths against 'testing the might of the soldiers,' saying that whoever did that would be doing so at his or her peril. Ekeocha disclosed that three soldiers, shot by the youths, were lying critically ill in the hospital and regretted that they were gunned down by people they were supposed to protect.

According to him, 'everywhere in the state is infested with weapons, with sporadic shots heard both day and night.

'The sporadic shooting by the Muslim and Christian youths, is also targeted at the soldiers,' he regretted, and advised politicians, traditional rulers, religious leaders and parents to counsel their wards.

'The soldiers are no more prepared to turn the other cheek,' he warned. Ekeocha, however, urged the people of the state to go about their normal activities as the STF and other security agencies were prepared to protect them.

The relative peace in the state suffered a severe blow on Monday, when youth groups clashed along Rukuba Road during the Eid-el Fitr prayers by the Izala Islamic sect. Several lives and property were lost during the fracas with many more injured while vehicles and shops were also burnt down.