‘My Husband Was Sleeping With Our Maid’—Eucharia Anunobi 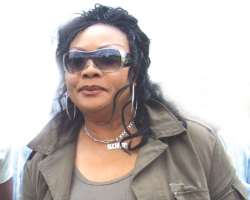 Eucharia made this disclosure while giving evidence in a divorce suit she instituted against her husband before the court, on grounds of infidelity, lack of care and abandonment.

The suit was filed in 2007, but had suffered several setbacks until yesterday, when trial started.

Eucharia, while being led in evidence by her lawyer, Michael Nwana, narrated to the court in tears how her husband slept with their 13-year-old housemaid, beat her up severally and refused to take care of their children.

According to Eucharia, she had been living happily with her husband until 2006, when she caught him having sex with their housemaid.

She further told the court: ” we got married in December, 2000, but have been living apart since 2006 when Charles started sleeping with our housemaid. When I discovered the incident, he was ruffled and decided to move out. Our children have not seen him since then and he has not shown concern for their upbringing.”

She also narrated how her husband turned her into a punching bag.

“He beats me virtually everyday. I got the mark that is now permanently on my right eye from his punches.” Eucharia is asking the court to make an order dissolving her marriage, grant custody of her children to her and award N10 million cost against her husband for the upkeep of their children.