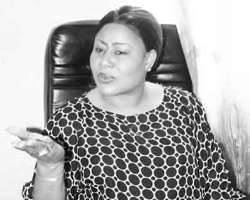 Her name, Ngozi Ezeonu surely rings a bell. As one of the popular actresses in the country, she has starred in many films playing the role of a mother more. In this interview with Flora Onwudiwe, Ngozi debunks the wild rumour making the rounds about the high rate of sexual harassment in Nollywood. According to her nobody is harassing anybody in Nollywood, stressing if ladies decide to give themselves to men, they will be abused. Please, find below details of this and many other issues discussed by this star actress:

You have been playing the role of mother in almost all the movies, does it mean that you cannot play any other roles or is it because of your size or age?
My size? I don't think I am that big, I know I am on the big size, but I am not as big as that. The thing is that, I don't know who to blame, I think is the producers, they give me the roles, maybe they think, that is what I can do, but in the past, I had done some other roles that are not just the mother role.

Why are you not practising journalism?
I think I chose my path.

After the programme, you practised for a short while?
No. I went straight into acting.

How did you discover your talent?
When I was very young, I used to mimick people a lot. Especially my mum and everybody, It is happiness all along, because once you are with me, you must be happy. That is the bedrock of what I am doing right now.

Sex scandal in the Nollywood is becoming embarrassing, as a mother, how do you feel when you hear about it?
My sister, this sex scandal I keep hearing from you journalists, I don't understand, but nobody ever ever embarrassed me sexually.

But I asked as a mother, how do you feel when you hear about it?
I know. What really caused all these frustrations is desperation, people feel they want to act by all means. It is never a do or die affair, if you want to make it in life through hard work, prayers, you will make it. Instead of going the other way. But I have heard from people who say they want to be stars by all means, that you can do anything. If you ask me, nobody is harassing anybody sexually. If you give yourself to men, they will take you.

You mean the cause of sexual harassment is desperation?
Yes, it is all about desperation when a young beautiful girl comes to a male producer and says, please, make me a star. I am ready to do anything; definitely, the producer will be taking advantage of that person.

The mode of dressing characterised by these actresses is not descent, is it because they are in the industry or what do you have to say about it?
What do you mean by the type of dresses that they wear? Let us be very honest with ourselves. You see ladies on the streets, you see young girls who are not actresses dressed in skimpy clothes. Why are you not raising an eye brow? An actress now wears something short and you complain, why is her own different? But in as much as I am one person who believes in dressing good, cover yourself up and I say that you look better when you cover up. But if others can wear skimpy clothes and get away with them, why won't we wear skimpy clothes and get away with them. It is all about what anybody wants. Dressing is a personal thing.

You are a pretty woman, did you play hard to get when you first met your husband?
I don't know, because I am always myself at all times. But playing hard to get, I don't understand. I am just myself.

Can you recall any incident that you almost sent your husband away just because you were being difficult?
In my own case, there is nothing like toasting. It just happened. And I got married, I cannot remember any other day that….. Like I told you, I am always myself. So maybe if I didn't want to marry him, I would have told him no from the on set.

What does love mean to you?
Love means everything. Love means living to me. Love means Christ that is the meaning of love to me.

Have you ever been betrayed by somebody you love so much?
No. Betrayal comes everyday, but there is none that has never happened before in anybody's life.

How have you been coping with the home front and acting?
It is the grace of God. Like I keep saying, God planned my life even before I was born. God made it so easy for me. And I will always give Him the glory because it has not been easy playing so many things at the same time. But I give God all the glory.

Is there any clothe that you cannot wear?
I could wear anything. I might decide to wear body hug, it all depends on my mood, my mood actually tells me what to wear. There are at times I want to be free, I wear free clothes.

Where did you study journalism?
I studied at Nigerian Institute of Journalism at Ogba. I believe and I was taught that a journalist owes the public an obligation to tell them the truth. You have to censor whatever goes out even with the movie that we shoot. When you deprive people from knowing the truth, so I like what I am doing now.

What other business do you do?
I do some personal businesses which I am not ready to talk about. I am floating an NGO right now.

What is the NGO all about?
The NGO is all about polio survivours in Nigeria and in Africa . So, when I am ready to come out, I would let you know.

There is an unconfirmed rumour that you are no longer with your husband?
I like the way you said it, rumour, so let's leave it like that.

When there is a rumour involving a personality, the readers may want to know if it is true or not.
It is a rumour according to you, so let it remain a rumour. I have heard it myself.

Are you a single mother?
When it ceases to be a rumour, then I will let everybody know.

These qualities of your ideal man highlighted, it then means that your husband possesses those qualities?
I am not complaining.

How did you meet your husband?
Boy meet girl. You fell in love and you married.

Can you distinguish between Ngozi in real life and when she is playing another character?
There is no much difference, if you ask me. Ngozi in the television is still the motherly quiet, homely kind person; she is not far away from the kind of person that I am. But when I am interpreting a role. I cry easily, but I am not somebody who cries over everything. Ngozi in the movie cries over everything. Even when she is supposed to put her foot down and say no, this is not the right thing to do. So, that is the only difference between Ngozi on television and the real Ngozi.

What does acting mean to you?
Acting to me is something that comes naturally. I don't believe in people over reacting if I am playing you. I have to understudy you and do it the right way. I will act you the way you are, that is the way I am.

How long have you been in this profession?
I started in 1993.

Challenges?
None, because I started when there was no industry; now, there is an industry, then it was so easy. I didn't really have those kind of challenges.

Has the industry taken you outside this country?
I just came back from America. I went to Virginia to act.

What is the movie all about?
It is an African movie because almost everybody was there, myself and Desmond Elliot were the only Nigerians. We have Sierra Leonians, Americans, so it is a combination of all.

And what did you observe?
They take their time when they are shooting unlike what we do here, we are faster and they are not faster at all. I took part in the two movies. One is “ Virginia for lovers” and the second is “Hope Alive.”

Africa Magic is a very good option that movies are viewed in many African countries, yet some of your colleagues are critizing this medium?
Yes, they are playing a part to you because you don't need to buy our movies again. All the stakeholders are going hungry. I know that they did not on their own come into the industry. They approached people who sold whatever to them. They should be paying us royalty, that is why we are complaining. The whole world now sees what we are doing. They show our movie and we are not getting anything in return. You don't show American movies like that without paying the actors royalty, that is why we are not happy about it. It is affecting everybody. But if they start paying royalty, our lives would get better.

Role model?
Before I started, I would say Whoopi Goldberg. She is one American actress I love so much because she is very natural. So, I really like her a lot. I took a cue from her.

Would you really encourage your children to take after you in this industry?
My job as a mother is to direct my children, guide them, I cannot tell them that I want them to be this or that. Unfortunately, none of them wants to act. But in case they decide tomorrow that they want to act, all is well and good.

What age did you get married?
I got married at the age of 29. And at that age, I should know what I wanted. Then, I got married and that was it. When I was much younger, my mother was scared, so that I will not have a child outside wedlock.

Your best female friend?
Most of my friends are males. I don't believe in having female friends. I want somebody I can tell my problems and the person will not broadcast it. Women are fond of doing that, but men will keep your secret, secret. So, that is why I am friends with them.

How many children do you have?
Three. Two boys and one girl.