Fate made me a comedian –'Latin' 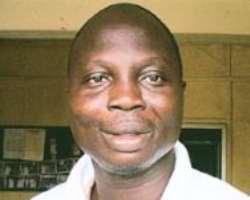 Bolaji Amusan, also known as Mr Latin, as a growing child, wanted to become a professional wrestler or boxer yet, he neither had a qualifying... physique nor a trait for violence. As fate would have it, he became a comedian and a celebrated one for that matter. Roaringly funny and abundantly blessed with great sense of humour the 43-year-old talented actor in this interview with YEMISI ADENIRAN unveiled his sojourn into the make-believe world, his interpretation of comedy and how he has managed to survive the keen competition. Excerpts:

How did you journey into acting?

My journey into acting, I would say, is by destiny. I never had any plan to be a comedian. No one knew then that the profession would become as lucrative as it is now. My dream as a child was to either be a professional wrestler or boxer. But here I am today to the glory of God. Naturally I am a free person, I talk freely and I think I have this sense called humour. But I never see any peculiar thing about it. All I know is that any time I say anything people laughed and a times if they were discussing anything before I even say anything they would burst out laughing, I guess it was the trait that one of my brother's friend saw in me and decided to link me up with a theatre group called Ariyo Theatre Group. That was in 1988. I joined this group not as a comedian but that was where I was discovered and I then decided to stick to it although, I could not have done other wise because it has been a role that is majorly assigned to me.

How did you get to become “Mr Latin”?

The name 'Mr Latin' originated from one role that I was asked to play in 1992. Mr. Ola Ogungbe, my Oga then, instructed that I mimick my landlord whose manner was to speak like some extra civilised literate that usually presented him above others. Then he, Ogungbe knew I could combine English and French with the Yoruba language together. I am not so fluent in French but I studied it and can flow somehow in it. I demonstrated it as I was commanded, mimicking the said landlord and it made everyone at the rehearsal laughed so much, Mr Ogungbe then was forced to ask me to explain the language I was speaking he said, “Is this Latin or French that you are speaking now? We cannot understand you ooo... Mr Latin.” From that day on, everyone began to call me Mr Latin and the name has become part of me till today.

Can you tell us about the doors of opportunities that the name 'Mr Latin' has opened for you?

The name Mr Latin has become popular even before I realised the assignment that was really ahead or attached to the name. It has brought fame and there is no where I go that I am not specially treated. That is one thing about the acting career. We might not be as rich as we are meant to be but the fame it gives ascribes respect and honour whereever we go. You are no longer an ordinary face where ever you are. People easily recognise you and want to associate with you. About the doors of opportunity, it is numerous and I give God the glory.

And the embarrassments it has caused?

No embarrassment as long as I can remember. A lot of people might say when they are going that some area boys rushed to them for some money and all sorts I don't see it as envy or embarrassment. I consider it as part of the price to be paid as a celebrity. And I believe it is because one is known and appreciated that they come, after all they don't do it to everyone. The only thing that I have had to live with is that as a known face, I can no longer do as I like. I now have some status and name to protect. I cannot be angry and show it, I cannot just do things that I would have done ordinarily.

Which of the movies you have produced brought you into limelight?

I have produced more than 10 movies so far, but I think, “Ta lo n gbe mu” actually made me more popular. It was after that movie that I got funny titles from my fans “Egungun Mogaji of comedy and others. It was after that movie that I also got the REEL award of the best comedian of the year 2003. Others like “Omo Ode de”. Mr President and Opolopo Opolo' have also brought with them much fame for Mr. Latin. In fact a lot of people still make request for Omo Ode De up till now.

At the initial stage when you indicated your interest in acting, were your parents in support of your career choice?

Although I had lost my father as at the time I came into acting, my mother who is still alive did not like the idea. The reason we all know is not far-fetched, no parent then wanted his or her children to be in a theatre group. As far as they knew it was a profession for the lazy and lay-abouts. There was no money there then and if care is not taken, they believed the careless life they lived would make them end up worthless. As time went by however, she agreed and gave me her blessings. She is in full support of it now and she is reaping the fruits of her labour.

As at when you took off, in 1988, acting was not as financially rewarding as it is now. What then kept you on?

I discovered I had a strong passion for it and since I did not struggle to get my job done, I saw no pain and I felt no burden doing it. Besides, the fact that producers kept calling on me for roles inspired me the more to be addicted to the career.

I was convinced that I had a future in the career and I thank God that he did not allow me to fall off the track because of money. Our own is even better, how about the likes of Oga Bello and so on that had been there for a while before we came up and our big fathers like Baba Ogunde, Kola Ogunmola, Ade Love and the rest that sowed with hard labour but never waited to be alive to reap the fruits. Thank God, people like us are still alive. What about others like Lukuluku, Epokinkin, Jacob, Alaran and the rest who were young comedians that had died before rewards came? I am not better than them. I just thank God.

In the movie industry there are lots of comedians with one peculiarity or the other. How have you been able to cope with this keen competition?

You have answered the question yourself, we might be many but each comedian has a peculiar way or style of creating fun and jokes. There are no two people with the same and exact talent. If you have taken your time to evaluate each of us, you would have discovered that our approach is not the same. So, Mr Latin has no competitors. He is different from Baba Suwe, Papi Luwe, Opebe, Dejo Tunfulu, Elesho, Ojoge, Otolo and so on. My own style of comedy is distinct and unique and that is how it will be.

What distinguishes Mr Latin from other comedians?

Mr Latin as you might have known is an old man who is educated and proves the I-too-know trait to everyone, everywhere he goes. He is a nasty old man who is principled and always want to follow everything to the letter. As far as Mr Latin believes, two plus two should be equal to four at all times regardless of the circumstance. He follows societal rules strictly and he is not easily corrected.

What memory usually brings pain to you?

No one on earth is all sufficient, it is only God Almighty that knows all and have everything. I am comfortable but whenever I remember how I dropped out of school in 1986, I always feel pain. This happened following the death of my father in 1985, I was then admitted to study Public Relations at the Ogun State Polytechnic. My mother who was then a petty trader could not be of any help and so, I had to leave school. Although I have started working on that, I always remember the pain of having to withdraw from school before the end of my course. Whenever I meet or read about someone who was my classmate then, the painful memory always rush back again.

But they are definitely watching you too and I am sure they all know you have done well for yourself too.

That is true but you know the place of education cannot be compared or replaced with any other.

Where exactly is Mr Latin from because a lot of people usually link you up with Abeokuta?

Those who link me up with Abeokuta are not far fom the truth as I have lived and still have all my property in Abeokuta. I have been in Abeokuta since 1974, I grew up there, came to limelight there and I have literally become part and parcel of the town. However, I do not originate fom there. I am from Gbongan in Osun State. My parents are from there and I had my secondary education level there at the then Gbongan Community High School between 1979 and 1983.

Some artistes take some drugs or drinks before acting. What does Mr Latin drink or smoke to make him give his best?

I neither smoke nor drink alcohol before acting. I have told you that comedy comes to me naturally, I don't have to hide under any drug to give my best. I take only soda water and I cannot even stand cigarette smoke.

Very cordial. I relate freely with my colleagues both in nollywood and the ANTP members. I give honour to everyone due for honour whether the person is older than me or not. I bear no grudge with everyone and I take corrections as they come.

Some of your colleagues have complained about their marketer's cheating and exploiting them. Have you had such experience?

I have two of them, Corporate and Zentury pictures. They have not been exploiting me and if they have it has not been to my awareness. Both have promoted me into limelight by risking their money and energy as investment on me. They make me comfortable and I really appreciate them.

By God's grace I wish I could grow to have my portrait and name on any of the nation's currency in the future and also to get to the level where creative arts students in the universities would have to study Mr Latin as part of their course. I wish to become an ambassador to this country one day.

Who are your role models in the movie industry?

Would you like to advice young and upcoming artistes who want to come to the comedy axis?

They should double check for the reason for their choice. Are they naturally talented or they just want to join the league for some motives known to them? How passionate are they for their choice. How persevering and humble are they. These and others are the traits they need to imbibe to make them successful. The sky is ever wide enough for many birds to fly. They are welcome on board.