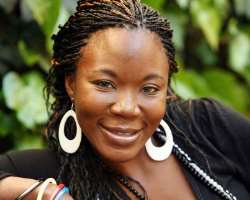 BBA gal, Ofuneke, has opened up on her regrets about her experience on the set of the reality TV show.

Speaking exclusively to http://www.nollywoodgists.com last week, the Delta State-born graduate of University of Ibadan blamed too much booze for the controversial events that unfolded during the winding down days of the show.

According to her, the organizers made too much booze available and so she indulged in it and that ultimately led to allegations of sex between her, Richard, the eventual winner who went home with a $100,000 and Tatiana, who was openly having a full blown affair with Richard on set.

Said Ofuneka defensively: “If it's about the incident that happened in the house you are referring to, we all make mistakes. It was when I drank too much that I realized that I had exposed myself to a lot of things. Never will I make that mistake of drinking excessively again.”
With her strict Catholic upbringing, there was speculation back in the day that her family had rejected her.

“It's not true that my family rejected me,” she said, debunking the rumours. “No! They never did. Rather, they were very supportive while the controversy lasted.”

It would be recalled that the actions of the housemates during its last days had sparked off a major controversy in the country. The show had received flacks from government officials who argued that it was encouraging promiscuity among youths.

Despite her regrets, Ofuneka says she also learned a lot from the experience: “It taught me tolerance, patience and the fact that there's nothing that we do that is within our power. Unless God backs us up, we are powerless. There are times when we think we are in control. But we soon realize that we cannot do anything without God's direction.”

Born to a family of five, Ofuneka attended a Catholic primary and secondary school before she got admission to study Chemistry at University of Ibadan from where she graduated with a B.Sc. in Chemistry.
Current projects

Life after BBA has been eventful. She spoke on her current projects: “Well, right now, I am working on my Non-Governmental Organisation (NGO), which I should be launching on the 29th of this month. It's called Ofuneka Youth Empowerment Fund (OYEF). It's like an after-school programme for both girls and boys. But I want to start with the girls first because they are the ones who are more in need and are more vulnerable. We would later focus on the boys. But for now, we are focusing on the girls. I also intend to build a youth centre in Delta State. Multi Choice has opened a trust fund account for this project. Apart from this, I also write for National Mirror. I am also a consultant at a fertility clinic. I also shot a movie in 2007 and a soap opera which is yet to be released.
Love life

Is she currently in any relationship? “No and it's not because the men are not coming along. But I'm into a lot of things currently. So if I go into any relationship, I might not have time to nurture it and besides, I want a man who's honest, trustworthy and supportive; one who would assist me achieve my goals. If we are compatible and we can tolerate each other then, there is no problem. The only person who is perfect is Jesus Christ. I want a long term relationship and if that comes around, I'd give it a shot.”