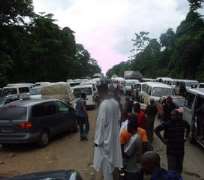 I am thinking that we should re-name the Lagos - Benin expressway 'The Devil's Highway' due to the state of the road and incessant armed robbery attacks on the road. Many road users have lost their lives on that road either from accidents caused by the poor condition of the road, or from armed robbers' bullets. There are stories of those who have passed the night in their vehicles on the roads as a result of the gridlock.

Recently I got caught in the mother of all traffic jams travelling back to Lagos from Benin and must say that I won't be in a hurry to travel through the road any time soon. I know that the former Minister of Transport Mrs. Madueke famously cried on national television after inspecting the road and witnessing first hand the plight of the road users but tears are not enough to console Nigerians and families who have either lost loved ones on that road or have missed business and other appointments due to the gridlock.

Although this is a federal government road, however, I think that the governors of the South East and South South states who have variously been staging economic summits should as a matter of urgency explore the model of funding the construction of the road as a result of its strategic importance as the major gateway from Lagos to the South South and South East states. This model has been used in the past in Abia state (under Orji Uzor Kalu) and Anambra state (under Chris Ngige); both constructed some federal roads in their states and were later reimbursed by the federal government.

Fixing this road will boost economic activities in both South South and South East states.