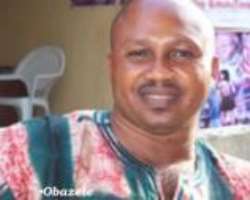 Following rumours spreading like wild fire, that the National President of the Actors Guild of Nigeria (AGN), Ejike Asiegbu, has sold the rights of Nollywood movies to Zimbabwe, President of the Association of Movie Producers (AMP) in Nigeria, Paul Obazele has denied knowing about the deal.

Obazele, in a telephone chat, told http://nollywoodgists.com that he was not aware of the issue, adding that he doubts if Ejike can really be involved in such a deal.

“I don't know anything about the issue and I don't want to be quoted. But I want to believe it's not true,” he said.

Ejike, who is currently in Zimbabwe, was said to have received the sum of N5 million from the Zimbabwe movie authorities so that they can sell any Nigerian movie in their country.

In a letter dated 22 May, 2008, and written on an AGN letter headed paper to Oketex Investment, PVT Ltd, Harare, Zimbabwe, Ejike said, “The national executive of Actors Guild of Nigeria wish to convey to you, our decision to appoint you as our representative to monitor, approve and sell any movie from Nigeria with Nigerian Actors in Zimbabwe and the whole of Southern African countries for a renewable period of four years.

“This decision was reached after our last meeting on 4 March, 2008 with you. You should also protect the films from pirates and make sure that royalties are paid to the Actors Guild of Nigeria or the relevant guild or body as appropriate.”