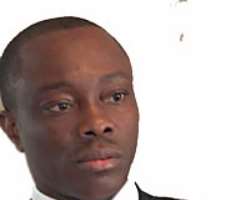 Born on April 7, 1973 to Chief Augustine Amadi Agwu and Mrs Mary Agwu, Julius Agwu has emerged a major entertainer and the first musicomedian in the country. A highly successful comedian, Agwu found fame following the release of his first album, Okombo, in 2000 in which he mimicked a hit track by Awilo. He remains a favourite of the audience owing to his versatile nature and his unique style of infusing comedy into music. His second album, My Style, went further to prove to critics that, indeed, he is a class of his own. Adia Ukoyen met with the gifted young man in Lagos for this chat.

How did you groom the comedian in you?
While in primary school, I was a perpetual late comer, hence, my teacher would ask me to entertain the class as a punishment for coming late. It was a daily routine because I would always go late to school every time I had to hawk akamu very early in the morning before going to school. I would mimic Uncle JB, the popular drugs seller who entertained at market squares and other places to attract customers.

Sometimes, when my mother sent me on errand, I would be carried away watching people or dancing to Oliver de Coque's Peoples Club of Nigeria. In the process, people would start to dole out money to me. That was how I discovered my talent and started developing it throughout my secondary school days. But when I enrolled for the diploma programme at the University of Port Harcourt, Colombus Irisoanga and the late Amatu Braide really helped to nurture my talent in dance.

How did the music part come about?
Music has been in me from childhood but I had to go to school first. After graduating from the university, I became a comedian. But because I wanted to do something different from what others were doing, I decided to try to carve a niche for myself in music. This desire gave birth to my kind of music which I call musicomedy.

Why musicomedy?
Musicomedy is that music you can listen to or watch on video and to which you can laugh. It elicits laughter, it makes you happy. I want to leave a legacy that Julius Agwu started a brand of music called musicomedy. That will be my legacy in the entertainment industry in this country. I decided to do what is called eclecticism; it is a style in arts, where you do not concentrate on one style, but fuse in different styles. So Julius does reggae but it has to be comical. He does gospel, but it has to be comical. He goes hip-hop, it has to be comical, he goes afro-beat or culture, it must have that comic aspect in it. That is the idea of eclecticism, which is woven around my kind of music called Okombo. First, my kind of music is musicomedy, but Okombo is the traditional name for it. I gave it the name because of the way you have to dance it. Musicomedy means Okombo. The power of my music is in the visuals. I believe so much in the visuals. My first album, titled Okombo, was released in 2000. And what I know is that the album is what made Julius Agwu a household name and I always give God the glory. My second album, My Style was to prove that I could do my own thing. The album was woven around jokes and had six tracks.

Would you say that you are a successful musician?
Yes, certainly. You see a lot of people come from abroad and they want the videos. That is part of the success of my annual show, Crack ya ribs, which I do every year, it's been running for the past three years.

How successful has your career in comedy been?
I hear things like dynamites come in small packages. That aptly describes me and the success I have recorded in my career as an entertainer. I am a small man who God has blessed abundantly. That I am small in size makes me dynamite.

Would you have wished that you were taller, considering your resounding success as an entertainer?
What do men taller than me have that I do not have? I have a very beautiful woman for a wife, she is indeed the definition of beauty, a feat many tall men may never achieve. Who am I to question God over how he chose to create me. No, I am fine the way I am.

This notion that artistes take drugs before they go on stage is what almost made me not to go into what I am doing today because I did not like that notion. It made me not drink. I started drinking in 1999 when I had a show with Guiness, which took us round the country. I wanted to let people know that there are many people in the industry who do not touch alcohol or smoke and still perform very well on stage. For me, I have a natural high. My stimulants are a microphone and a good audience. It's only an artiste that does not believe in himself that would drink, take drugs or smoke Igbo.

How would you describe yourself?
I am a small, young man who God has blessed abundantly. They say that dynamites come in small packages. I like to believe that the phrase aptly describes me. I am humble, kind and down to earth. I am not easily angered.

What do you aspire to be?
I aspire to be very vital and instrumental to the growth of the entertainment industry in Nigeria and Africa. There is much to be done especially for one who has declared himself an entertainment practitioner.

What is your philosophy of life?
Believe in yourself, focus on whatever you do, you'll get there.