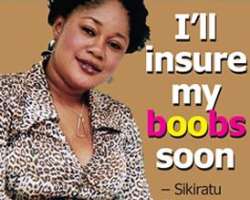 Her real name, Tayo Odueke, may not ring a bell like her stage name Sikiratu Sindodo, but whenever you talk about the Yoruba genre of Nollywood, it would be incomplete without mentioning this ebullient and plump star actress. Tayo, who has featured in both Yoruba and English movies with the production of seven of her own movies to her credit, told http://nollywoodgists.com in this interview that she will insure her big boobs in ten years time. Her reasons for this protection of her boobs is because it is one part of her body she loves best. The Ijebu Ode born actress also spoke to ORJI ONYEKWERE about her love life, her acting career and many other topical issues in the Nollywood:

Comment on Saidi Balogun
He is a nice man, intelligent person and a good actor but he talks a lot and he can abuse you too. He is a very nice man and he is like a big brother to me.

We are looking forward to City People celebrating you too Well, I hope it will happen soon.

What of English movies
Well, they don't have much demand for us, because of their tribal sentiments. They are tribalistic. If they demand for my services, why wouldn't I work for them? I featured in a soap opera and also Super Story and Tunji Bamishegbin's story sometime ago. I am working on my own soap as well.

You produced your movies?
Yes, I have about seven movies I have produced on my own and they will come out very soon. I have produced, Ikan, Pami nku (2006) Imado (2005) etc. I have featured in movies like Ika kefa, Etàn, Itu , Mayomi, Esuru, Omo mi,Omo mi 2, Pami nku ,Tidi ba baje and Imado, among others.

Are Yoruba scripts easier for you to interprete?
Both English and Yoruba are challenging and competitive. But the competition in the movie industry is really coming up. It has increased now.

How has the downturn in the industry affected you?
No, it has not really affected us actors. It's only affecting the producers because before you shoot your movie you have to see if the movie is going to sell.

What are you worth?
I can't tell you what I am worth.

So acting has opened doors for you? Yes, it has.

What of the negative sides?
Some people don't like the roles you play because some don't even believe that it's a movie in the first place. They call you on the phone, how they get your number, I don't know and they begin to say many negative things, call you names and all that. But I just know that this is the prize to pay for stardom. Since you're a star, you should be ready for anything. It is part of me now. I think I have been in the movie industry for about nine years now and it has opened many doors of opportunities for me.

About yourself
My name is Tayo Odueke and people know me as Sikirat Sindodo. The movie that shot me into limelight was where I played the role of Sikirat Sindodo and that was about eight years ago and I am still holding on to it. I am from Ijebu Ode, Ogun State. I am from a polygamous home. My parents are caring.

Your foray into acting?
It was a long time ago, I was in the house sometime ago when one of my friends called me and said she wanted me to act in a movie and it happened to be an English movie. So when I got there the producer wanted me to play the role of a bodyguard, it was after that movie Bodyguard that I started getting calls. When I met Uncle Segun Arinze, he introduced me to Yinka Fowora and that was how I got into the Yoruba genre.

Which of the movies gave you tough time?
It was that first movie, Sindodo that was the first challenging role I'd ever played.

Have you ever been uncomfortable playing a love scene with somebody you don't like?
Well, that's part of my job, that's what I am paid to do. I know what I am coming into, so I don't find it difficult getting into any role but I can't cheapen myself for anything at all.

How do you feel when negative things are written about you?
I told you before it's a prize to pay for stardom. Obviously it will be painful because I am a human being but I have to let it go in order to move on with my life.

How do you handle demands from men?
It's the normal thing for a woman. I cope.

So your man doesn't get jealous?
Obviously he gets jealous; he knows that's what I do. He will get angry and we would sort it out

What does the tattoo on your body mean to you?
I did it because I just wanted to do it

What do you love so much about your man?
I like him because he is God fearing and nice.

Any part of your body you will want to insure
I don't know yet, maybe my boobs and that maybe in another ten years.

Why your boobs
Ah…because that's what I love most in my body.

Is that what turns your man on?
Maybe, I don't know.

Precious gift your guy has given you?
Maybe a car.

What's the naughty thing a male fan has said to you?
A guy called me the other time and said he wanted to rub my back.

Why? I don't know