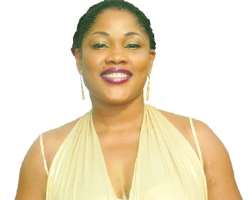 She shot into the limelight after her brilliant performance in a Yoruba flick entitled Omologbalogba, thus, earning herself a moniker in the movie world, Bisi Omologbalogba.

Born Bisi Ibidapo Obe, this actress rode to fame and fortune as a result of her incursion into the make-believe world some years back.

The sultry actress is as popular in the Yoruba sector of Nollywood for her acting as she is for the stories linking her with several men in the society.

Bisi secretly tied the nuptial knot with a Europe-based businessman some months back and all she could say when asked what has it been like being married was, "married life is good and fine. It's a wonderful and nice experience. It's just a traditional wedding though we would be having the big wedding soonest."

She has flowery words about her significant other: "My husband is very understanding, he doesn't see me as a star actress, he married me as Bisi Ibidapo Obe and not Bisi Omologbalogba, he was attracted to my person and not an actress, in fact, he is not your regular film kind of person."

With all that is being said about actresses and several stories linking her with one man or the other, what were the obstacles she faced from her hubby's friends and families?

"Well, we are bound to have people who would not approve of our relationship and there is no perfect or smooth marriage but I thank God because his family and friends didn't oppose our relationship because they wanted his happiness and they didn't want to spoil what we have.

"Many of his friends respected his wish and he knows me and he is not the regular guy who would open or make himself available for gossip or speculation. He is just the right man for me and I love him for that. When I prayed for a husband, I prayed for the bone of my bone and flesh of my flesh as my husband and that was what God gave me. No matter what is said about me, my husband loves me just the way I am."

Bisi, is the love interest of many with her face adorning the cover of countless jackets. She, however, virtually fizzled out of circulation recently with little or nothing being heard about her. Explaining her absence from the make-believe world, she said: "I have been away from the scene because I have never liked being seen at all times and everywhere. Even in the films I act, I get choosy and I don't just appear in every flick all the time. I don't come cheap and I can't act without getting paid. Aside this, I don't like to be in every film because it's not just worth it and my marriage needs a lot of attention from me at the moment."

After successfully producing two flicks, Bisi is on the verge of releasing her third flick and so enthusiastic is she that she has made advanced plans for the flick, which she refers to as a big project, to be shown at all Silverbird Cinema outlets when released.

"I have produced just three films and the third one is on the way. It's simply because of God's grace that I have been able to succeed as a producer because being a producer entails a great deal. My first flick was sponsored but this movie, which is a big project, has gulped not less than N5 million. I would be premiering it at the Civic Centre, while it would first be shown at all Silverbird Cinema outlets."

For many, her pretty face and carriage has helped her attain the height in Nollywood but the actress sees otherwise.

"The truth is that I give thanks to God all the time because I don't think I am the prettiest lady in Nollywood and neither am I the most talented but because of the Lord's grace, I have been able to succeed.

"Also, I have been myself and gone this far in the movie industry because I have strictly stuck to my principles, which is not mingling and going about with friends in Nollywood because we don't love ourselves that much in Nollywood, especially in the Yoruba speaking sector where there is a lot of envy. And to avoid any misunderstanding or problem, I have been myself and kept no friends. Don't get me wrong, I still talk to my colleagues and relate well with them but it begins and ends on the set. I don't keep Nollywood friends and it is deliberate," Bisi said emphatically.

One thing that is believed to have helped Bisi attain success in the entertainment world and which has also at some point haunted herwith her being linked with several menis her beauty. It is thus, natural for one to wonder how she copes with these men, who are reported to have pestered her for a relationship or friendship.

"The fact that you are pretty and well dressed, would definitely make guys come after you. Even a lady that is not perceived to be pretty would also be chased by men, let alone a celebrated personality.

"I like male platonic friends and I enjoy keeping such friends than having several ladies or women as friends because they don't gossip and they would not be bothered about what ladies would be bothered about. Rather, they would help you grow in your chosen career and life.

needs to draw the line and make them understand that you are married and can't engage in extra marital affairs. They have always come before I got engaged and they still come despite the fact that I am known to have been engaged."

What then is her hubby's reaction to this?

"My husband is so understanding and it's so funny that sometimes, some men even woo me when I am with my husband but I am always careful and I tell them that I am married. Some men don't even care if you are married or not but like I said I am married to a wonderful and understanding man, who loves Bisi Ibidapo Obe and not Bisi Omologbalogba.

"I think men would always be men but the onus lies on the lady to decide and know the right thing to do when such things happen. Especially for a married woman, it's important that you know how to turn down these men, who would not mind or respect the fact that you are married but who will just love you because they see you on the screen," Bisi said finally.