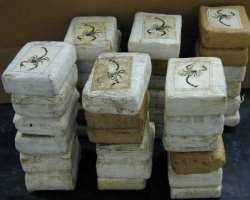 The suspects, 57-year-old widow, Mrs. Adeleke Abisola Mariam and 29-year-old Okafor Churchill, had concealed three kilogrammes of cocaine inside garri and 7.5 kilogrammes of cannabis inside palm oil, respectively. While Adeleke was found to have carefully packed the powdery substance that tested positive to cocaine inside the garri in her luggage, Okafor Churchill had concealed the dried weeds that proved positive for cannabis, in four ten-litre plastic containers, each of palm oil, in his luggage.

Adeleke was apprehended on Saturday, 11 April, 2009, during the screening of passengers on a British Airways flight to London. During interrogation, she accepted ownership of the drug and stated that she agreed to smuggle the drug to London for a fee of 4,000 pounds. The suspect claimed to have lost her shop at Tejuosho market in Lagos to the fire incident that gutted the market in 2007.

“I used to have a shop where I sell women's shoes, bags and children's clothes at Tejuosho market in Lagos, before I lost everything to fire. I tried to establish my business at the Oshodi market but we were displaced by the government. When I could no longer afford my rent in Lagos, I moved to Ife to join my mother. I have never done drugs in my life but I was pushed to the wall,” Mariam stated.

She confessed that a man who promised to help her, lured her into the illicit drug business. “We met twice at a popular eatery at Gbagada area of Lagos before the deal was sealed. He used to pay my transport and give me feeding money each time I came to Lagos from Ife. On that Saturday, he gave me a bag, with a kilogramme of cocaine neatly packed round the walls. I did not know that he kept it inside garri. He did not even tell me that it was up to three kilogrammes. The agreement was one kilogramme and my fee is 4,000 pounds,” Mariam stated. She is from Ife East Local Government Area of Osun state.

Okafor Churchill, a trader that sells clothes at the Onitsha main market, was also not lucky, as he was caught with illicit drugs on 12 April, 2009 (Easter Sunday). He was to travel to Guangzhou in China, on an Ethiopian airline. He confessed that he was tempted to carry the drugs because of the high profit margin. “I bought the cannabis for twenty-five thousand naira in Onitsha. I concealed it myself. My intention was to sell it in China and use the money to buy clothes.

“During my previous trip, I was told that a little quantity, like the one I was caught with, could be sold for 4,000 US dollars in China at wholesale price. That was what pushed me into it because customs seized my goods worth about 2 million at Ore, Ondo state. Since then, I have not recovered financially.” He hails from Oyi Local Government Area of Anambra state.

The suspects, according to the NDLEA Act Cap N 30 laws of the federation 2004 ,could serve a minimum of 15 years imprisonment if found guilty by the law courts. But in reality, PM.NEWS can reveal, they are likely to be given light penalties by Nigerian courts.