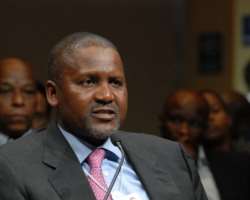 The emergence of Yar'dua as President of Nigeria following the flawed electoral exercise of 2007 which saw with it the emergence of new National power brokers and a rustic shift and/or switch in power within the administrative corridors of Abuja, and has given way to a new political war between the new breed of political power players and the old block of power players in the likes of Andy Uba and Aliko Dangote.

As gathered by Ukpakreports.com, the latest signals of a mounting war between the political blocks began to take hold during the early days of the Yar'dua presidency. This is as James Ibori who financed the presidential campaign of Yar'dua, arrived to the Abuja scene as the new political big-boy in town. Prior to James Ibori's arrival, Aliko Dangote was primarily the main financier of the People's Democratic Party [PDP] in the Abuja power corridors. Aliko Dangote controlled the Economic and Financial Crimes Commission [EFCC] via his political godson and the then Chairman of the EFCC in the person of Malam Nuhu Ribadu. Dangote's control of the EFCC, as gathered through sources in Abuja brought about the arrest of James Ibori immediately following the accession of Yar'dua to the office of the Presidency and the arrival of James Ibori as the new godfather. Dangote's power was threatened by the sudden emergence of a southern power broker who was independent on the Dantata power block. Dangote's actions to curtail James Ibori's emergence via the EFCC triggered the chain reaction of events that inevitably saw the removal of Nuhu Ribadu from the Chairmanship of the EFCC. James Ibori, as gathered, affected the change of guard at the EFCC to hit back at Dangote apparatus of control and to further reinforce his arrival in Abuja as the major player to be reckoned with.

With one of Dangote's political power holds jolted, the duo of Saraki and Ibori moved on to Andy Uba, the special aide to the former President of Nigeria, Olusegun Obasanjo, in their move to sanitize and/or sterilize AsoRock from the influence of Obasanjo and his men. To this affect, the combination of Ibori and Saraki launched a campaign against their former ally [Andy Uba] to blackmail him away from having the access he enjoyed to the Presidency via his wife, Turai Yar'dua.

As Ukpakareports.com gathered, sources within the presidency state that Andy Uba may have lost favor with the presidency over an allegation levied on him via the duo of James Ibori and Bukola Saraki. The allegation, according to the source, has to do with Andy Uba's attempt at bribing the Supreme Court Judges to rule against Yar'dua over his electoral case. Our investigators were not able to confirm the realness of the allegation however it was learnt that the Presidency bought the story as real.

Stretching their reach, the duo of Saraki and Ibori took their attack to the PDP - to uproot Andy Uba's remaining chances at mounting a comeback in the upcoming gubernatorial race in Anambra 2010. As learnt, Ibori, through his vast connections and monetary influence within the current PDP structure, has gotten the PDP Chairman to assure him that Andy Uba will not be given an automatic ticket as its gubernatorial flag bearer. Adding flavor to the power show, the Ibori/Saraki influence is said to now find itself within the judicial complexes in Enugu – where Andy Uba recently filed an appeal against his electoral victory in the gubernatorial election of 2007 in Anambra. As can be recalled, Andy Uba via the instruction of his political master in the person of General Olusegun Obasanjo, had sought out the then outgoing Governor James Ibori to finance the presidential campaign of Umaru Yar'dua using monies from Delta State coffers. Prior to this period, the Andy Uba /Obasanjo political group were not particularly in the best of terms with the budding political group of James Ibori. So it served an easy transition for Ibori - once he took to the political stage in Abuja – to begin the ousting of Andy Uba and the remaining Obasanjo influence.

In thus, the fight between the two political elephants has had it consequences on the federal government. It has paralyzed crucial parastatals and agencies of the federal government while simultaneously throwing the ruling PDP into a lock jam. The EFCC, who currently owes it allegiance to James Ibori and Saraki, is said to also be held down by lingering sympathies/affiliations for the Obasanjo/Dangote/Uba group. And for this reason has found itself [EFCC] stuck in neutral – without the liberty to launch and conclude investigations of high level corrupt officials. Such sedation of the EFCC comes on the heels of N40billion agric contract award to James Ibori - of which was recently topped by another contract award of N53billion. The N53billion contract award was awarded secretly for the supply of military equipment to the Nigerian military.

President Umaru Yar'dua, as ukpakareports.com has learnt, has become overwhelmed by the intrigues of the ongoing battle, and has thus turned ambivalent to the matter.