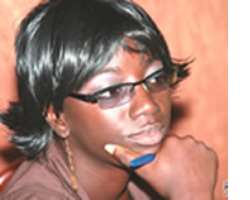 Aminat Titilayo Adebayo is a Film Director. One of her works is a soap opera, Private Sector, currently showing on television stations across the country. In this interview with Adewale Oshodi, she speaks on the soap and how she's using it to promote moral values among Nigerians. Excerpts:

You are the director of a soap opera, Private Sector. Is there any reason you came up with that title?
Private Sector is actually the beginning of a long term vision of people who have alternative view of how cinematography or movie production in Nigeria should be. Private Sector is developmental drama and there is none like it currently in Nigeria. There have been talks of the Millennium Development Goals (MDGs) which keep changing, but Private Sector is actually talking about the challenges we are facing as a country, which are preventing us from achieving the MDGs. In short, Private Sector examines the challenges and possibilities in every day life. The soap is dramatised, using a fictitious company called Husodev Consult, where, like in the same real life setting in the country, issues of power play, sabotage, suspicion, betrayal and some of those things which are preventing us from achieving the MDGs are revealed. We want Nigerians to understand how we can move the nation forward and how can we achieve these goals that other developed countries have achieved. However, I discovered that most of what we see on the screen these days centre on love and crime, and this is encouraging vices among our youths, but with Private Sector, we are trying to change the direction of our youths towards a more positive one for the country.

Who are the artistes in the production?
We have Raphael Steven, who is Olufemi, the Manging Director of Husodev Consult; there is also Michael Davies, who has the supporting role as Muthar. On the board of the company, we have many different characters, and humour is infused here. We don't have very popular artistes on the production and that is deliberate. Those we have are,however, capable of giving the popular artistes a run for their money. We are using these new artistes to promote new faces in the industry. There are artistes with potential in the industry and we can't keep on recycling the same set of old faces all the time.

Producing a soap is not a tea party; how have you been sourcing for fund for the production?
The producer of the soap happens to be my husband and he has this long-term vision of using art, music, movie, dance, drama and photography to trigger a renaissance in African culture. If you look at his book, Bob Marley: Songs of African Redemption, you will discover the analyses on how music can become a weapon for the liberation of the people. He is writing another on Fela Anikulapo-Kuti, and the title is 'Abami Eda: Music as a weapon'. And having had this long-term idea that movie and music can be used as a weapon of enlightening and uplifting the people, he has been funding the production through private means.

So, on what stations are Private Sector showing?
Private Sector is currently showing on TVC, LTV, MITV, and from the first week of April, it will start showing on Galaxy Television. It is going to last about 52 episodes but we have already produced about 20. However, the screen play for the entire series is ready. We will start shooting from April to produce the last 35 episodes.

Who actually wrote or developed the soap?
Raheem Buchi wrote the soap. He is one of the most imaginative and constructive writers in the country today. What we did actually was to develop a new attitude to movie production and movie making. Since the storyline is the life of the series, we made sure that the story of the soap flows from the beginning till the end. This is necessary because if there is no storyline, then the drama is not worth it. That is why Nubia House Productions deliberately trained the cast and crew intensively for 18 months before we started the production of the soap. Private Sector is our first effort and we are doing everything possible to make it one of the best productions to ever come out of the country.

Soaps showing on television stations in the country often accept advert placements. I guess it isn't different for Private Sector...
Soap opera production in Nigeria is driven by advertisement and spot placements. If you spend N40million to produce a 52-week episode drama, of course, you can't show it for free because where will you recoup your production cost from? And you are either going to pay the station for airtime or they partner with you, and you have to share the spot placement advert booking according to an agreed formula. So, that's what we are going to do. But like I told you, we are going to mobilise goodwill to ensure that we are able to shoot continuously without interruption whether there is advert or not.

How has the public received the episodes that have been shown so far?
Nigerians have really accepted the soap. The pace of the drama builds up, unlike what you have with some other dramas in Nigeria. We build up the story in such a way that every character is fully developed as the drama goes on. That invariably means that it will take a little time before the dramatic action unfolds and race towards the end. But most professionals who have seen it are already commending it for the quality of production and the vision of the director.

What makes you think you can change Nigeria with the production?
We are very sure about that because what we did was to create a fictitious company, Human and Social Development Consultancy. Then, another parallel consultancy company called Maxwell Agency. The two are the biggest solution company in Nigeria in terms of development agenda. One is a chop-I-chop company, which is like a government parastatal, while the other supports positive development. So, if you watch the soap, you will be able to identify the positive and negative development forces. Private Sector reveals the problems facing the country and how to tackle it.