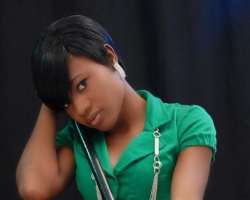 Adeola Bamisile is one girl a lot of her friends in her Leed City University, Ibadan are envious of. The reason is because, she is the most adored and apple of her Justice father, Justice Bamisile, one-time Chief Judge of Ekiti State.

While Adeola was still in secondary school, her passion for modeling was without a shred of doubt as she was often found glued to the TV sets whenever there was any beauty pageants or events that caught her fancy.

Today, one aspect of the modeling that the pretty faced 400 level law undergraduate of the first private university in Ibadan, Leed City, has found something of interest in is the billboard or products adverts, the reason is that, nature has not been fair to her with height that's why she has been operating under the aforementioned.

For her strict dad, we gathered, “if her dad should know about it, she's in trouble because the very discipline man wants all his children to be educated first before they choose whatever career they are comfortable with.” A close family friend informed.

Does that mean that the dad has not noticed all the moves the first daughter has been making all this while? We inquired “I don't think the man knows about it, if he does, he would have warned her against it. For you to know how real the man is, his first son read law, Deola is reading law with her immediate younger sister, Ronke, so informing the man about her love for modeling would be very disastrous not even at this time that he's currently having an arsenal of legal tussle with the State government over his unconstitutional removal as a CJ of Ekiti State.” We were told.