A romance with nature at Erin-Ijesa 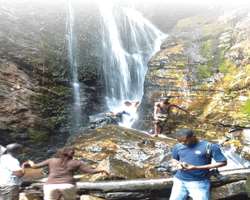 FUNKE ADETUTU, who was at the Erin-Ijesa Waterfall in Ilesa, Osun State, writes that the spring is a soothing balm and beautiful sight to behold. It is 1pm. The yellowish rays of the sun fall brilliantly on the rustling leaves of nearby trees, while its light plays a trick on the trees' greenery. The rustling sound of the leaves and the chirping sound of birds nested on the tree branches create a harmonious sound that only nature can produce.

It is this kind of atmosphere the MicCom Golf Resort in Ada has to offer this Saturday afternoon.

“We shall travel to see a lake and later the Erin-Ijesa Waterfall,” Emilia Asim-Ita, the marketing/public relations co-ordinator for the Future Awards, announces to the group. And within a short time, we are upward bound to Ilesa.

It is a smooth ride from Ada to Erin-Oke, the little village where the waterfall is located. We drive through little villages and settlements and the Ilesa Township.

Ilesa is a boisterous town alive to the rhythm of the hot sun, where men and women go about their businesses in the full glare of our little convoy as we drive through. After about some 20 minutes drive, the bus veers off the expressway into a bumpy road that leads to the sleepy village of Erin Oke.

The asphalt on the road has worn off and has been overridden by sand and dirt. Later, the bus navigates its way through a path overgrown with shrubs and bushes before it finally pull to a stop before a blue wall. A brownish black gate is erected on it to keep intruders at bay. Written on the battered wall is a barely visible price list: Children N50; Adult: N100; Photo camera; N500.

Adebola Williams gets off the bus to negotiate with the gatekeepers before we are allowed entry.

“Welcome to Erin-Ijesa Waterfall. The Living spring” reads a weather-beaten signpost at the entrance.

Although the inscription is almost fading, yet they are legible. Used packs of food, can drinks litter everywhere. Food, drinks, and shower cap vendors shout out their wares to the hearing of adventurous tourists and picnickers, who throng the waterfall daily. A group of tourist is finding its way out when we arrived.

At the foot of the stairway lies a pile of debris which is an eyesore for a tourist centre like this. We hiked up amid threat of climbing different levels from those who were there the previous year. Defying the threat, we trudge on in anticipation of what lies ahead, stepping on the murky water streaming down the stairway. Intermittently, as we scrambled upward the muddy, rocky slope, we pause for a couple of group photos before moving on.

The lapping sound of the spring could be heard miles away as we climb the muddy dilapidated stairs of the waterfall, and the coolness of the spring permeates everywhere. After walking for about 10 minutes, we came face-to-face with the famous Erin-Ijesa Waterfall. The water cascades down slimy rocks turned green by the constant flow of water. Broken pieces of rocks serve as stepping stones through which we climb up to the water.

The Olumirin Waterfall, as it is also called, is lovely and the sight before us is breathtaking. We all screamed for joy at the sight of the gift that Mother Nature bestowed on us. With almost a blind rush, few of us pull off our clothes to have a first hand feel of the cool water gushing out of the rock.

Many people climb to the third floor with the hope of reaching the water source.

Richard Olasinde, front office supervisor, MicCom Golf Resort, who also doubles as our guide, explains to me that the source of the spring is on the seventh step, which is about two hours journey from the first step where we are.

“There are seven steps. Where we are now is just the first step. The last step is a flattish area covered in trees. There are all kinds of fruits like pineapple, oranges, among others there. The source of the spring is a rock like the shape of a pot from which the water gushes like a pump.”

Olaseinde believes that for most tourists and funs seekers, climbing up to the third level can best be equated to traipsing the snowy steeply mount Everest. Obviously, being at these different levels and just basking in the invigorating freshness of the falls is an unforgettable experience, for most people.

“The place to be is definitely the seventh level,” he says. “Not only does it lie at the peak of the falls, it is also hosts a settlement where many of its inhabitants have lived for several years including a church.”

According to him, from the top of the falls one could see the town of Erin-Ijesa itself.

In the end, we could not help it but agree that Nigeria is a beautiful country and Nigerians are indeed very warm people with a very rich culture.

From the Yankari Games Reserve in the north, to the Obudu Cattle Ranch in south, the nation is indeed a haven for tourists. Nigeria is full of breathtaking landscapes and awe-inspiring sceneries as the Erin-Ijesa Waterfall like any other tourist attraction in the country has a story to tell.

“Amazingly, the fall doesn't look like anything out of this world until you begin climbing the seven levels of the ascending plains of the waterfalls. The view at all the levels is wonderful and the freshness of the water is energising.

“However, the last and seventh level is definitely the most intriguing, well that's if you ever dare it,” says a friend, who had been to the waterfall.

Although, we never dared to climb far up yet, but the refreshing water from the fall is very irresistible, hence it is saddening when Adebola Williams announces that it is time to go. Erin-Ijesa, we all agree is indeed a sight to behold.