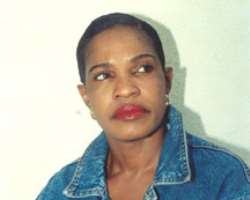 Stella Monye has paid her dues, although the younger generation seems to have taken over the scene. Anyway, the gist is not about Stella's musical career. It is about her recent brouhaha with a female entertainment journalist with Source Magazine, Osas Ogbonmwan.

According to the journalist, Monye threatened her and 'promised' to deal with her in “this Lagos.”

Talking about what led to the face off, Osas said she had gone to interview former PMAN president, Bolaji Rosiji in his Gyuranga foundation headquarters in Apapa Lagos. According to her, she was done with the interview and was on her way home when Monye appeared and started shouting at her. “She said I did a story on her and that I was supposed to do a retraction because. I misquoted her. I told her that we had written the retraction but it was unfortunate if she didn't buy the magazine when it was published.

“All of a sudden, she started calling me 'asewo', 'ugly girl'. Tell me, what has those names got to do with a retraction? Before I could even say anything, she told me she was going to deal with me and she would send boys after me. She said that this Lagos would never contain both of us after she is through with dealing with me.” Asked whether she had ever had any other personal problem with Monye before the incident, Osas said, ”No. I have never had any problem with her. But I think she believes I am dating Rosiji. But that is a big lie and a misconception. I have never dated the man and I don't intend to date him.

“Stella went as far as jumping out of the window saying she was going to beat me up. If not that people held her, it would have turned into another thing.”

After the interview, Life and Beat called Monye and she had a different story to tell. “I have never had a problem with any journalist even when they write rubbish about me. But in her case, what she wrote was very malicious and it hurt me. I told her she should retract it and she claimed she had. But she was lying. My sister went to their library and checked all the editions within that period and she didn't see the story.

“The journalist had something in mind. There is an undertone to that story. I know she wrote that thing because of the guy in question. But why should it be my business? I am not dating Rosiji. I have been working for Gyuranga for well over five years. If anybody, journalist or whoever, wants to go out with Rosiji, how is that my business?

”I just asked her why she hadn't written the retraction and the girl started insulting me. That was all. She started calling me names. I don't have anything against her or any other journalist.