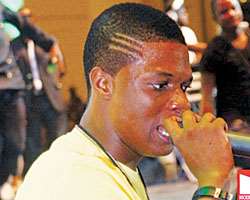 D'banj was first nominated for the awards in 2007 but lost to compatriot, Tuface Idibia. The following year, he lost it again to 9ice. But the 31-year-old has had a remarkable year, just like the other contestants too. Meanwhile, Beyonce, Rihanna, Nicki Minaj and Bruno Mars are the nominees in the other International Act category. It will be a straight battle for the top prizes between British pop star, Jessie J and soul sensation, Adele, as they both land a combined nine nominations.

A lot of reasons account for why this year's event promises to be interesting. Apart from the fact that it will be co-hosted by American R n B star, Jason Derulo, 90s R n B super group, Boyz II Men, will be celebrating 20 years in music with a special performance.

Holding on October 5h at the Blythswood Square Hotel, Glasgow, Scotland, MOBO founder, Kanya King, says, 'We made music history in 2009 when the show was transported out of its birthplace in London for the first time, and taken to the SECC in Glasgow which hosted one of the most jaw dropping shows to date. We had such a fantastic experience then that it felt very natural for us to want to return and build on our great relationship with the city.' King further says Glasgow would also host the awards in 2013 and 2015.

MOBO was launched in 1996 as the first awards show in Europe to celebrate urban music while the organisers continue to claim that it plays an instrumental role in elevating black music and culture. Interestingly, the organisers have never dignified African artistes with a performance slot at the awards.