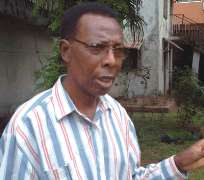 Dr. Frederick Aya
Having worked with the Nigerian Institute for Oil Palm Research, and the Federal Ministry of Agriculture, Dr. Frederick Aya went on to develop palm tree species that bear fruits all the year through cross breeding. The Benin, Edo State-based agronomist tells James Azania about the issues in Nigeria's palm oil industry

The story is that Nigeria, as a net exporter of oil palm products in the 1970s, offered seedlings to other countries, including Malaysia, which today has beaten the country to the game, to the extent that we're no longer reckoned with in the business. Is this fact or fable?

First, let's get some of the facts straight here. The oil palm is commonly found in Africa, Central America and South-East Asia. In Africa, it's indigenous to tropical areas of Cape Verde and the Gambia in a 30-mile strip along the coast of West Africa, including coastal areas of Somalia, Kenya, Tanzania and Madagascar. It's partly true and partly fable. The fable is that Malaysia came to take palm oil seedlings from Nigeria. They did not. The fact is that they started the plantation culture before us. The oil palm in Nigeria occurred in wild growth and it's profuse. In fact, that is why our people didn't learn the plantation culture. The Europeans, when they came, of course, got palm oil, and all the exports were from wild growth. There was the Oil River Protectorate. It's true that Nigeria used to be a lead exporter. In pre-independence Nigeria, oil palms occurred wild in dense groves in the South-East and were the source of the commodity for Nigeria's early exports of palm produce. In 1965, Nigeria was the world's highest exporter of oil palm and palm kernels - a position we lost during the Civil War and have never attempted to regain. By 1972, we'd become net importers of palm oil. In its heyday, the country produced about 180,000 tons of palm oil as well as 440,000 tons of palm kernels. The fact that it was growing wild didn't give us the incentive to plant. The wild palms in the natural groves were mainly of the type with low inherent productivity, but the abundance of their products virtually in all localities precluded efforts to cultivate the crop. This fact is mainly responsible for our lack of plantation culture, which has relegated the oil palm industry to the background of our economy.

Meanwhile, the South-East Asians had started plantations. The first plantation in Malaysia began in 1930, and when you hear plantations, you will marvel. One plantation will be 75,000 hectares. And of course the British colonialists had many commercial companies engaged in the palm oil business. The weather is so good there; they have rain all-year round. Since 1965, Malaysia holds a oil palm conference every five years. There are some of those fallacies about the Nigerian oil palm industry: that the Malaysians took their first oil palm planting materials from Nigeria. The first introduction of the oil palm into South-East Asia was in the form of four seedlings, two from the Hortus in Amsterdam and the other two from Mauritius. The four seedlings, which were planted in the Botanic Garden of Bogor, in Indonesia in 1848, became the parent palms of the popular Deli dura of Sumatra and Malaya, now Malaysia. The other two types are the pisifera and tenera.

So, where did we get it wrong?
It's from the government. Our government people were not planning with objectives. We started Okomu (Oil), in the old Bendel State, in 1976, the same time with the one I went to in Malaysia - FELDA plantation - which was also an undertaking by their federal government. By 1981, they (Malaysia) had completed a total of over 230,000 hectares. Okomu, by 1989, had done 4,000, while the surveyed area was 15,000 acres. And, between that time, they had planted less than 3,000 per acre, until it was turned over to the private sector.

Is that all, especially now that you have a lot of private concerns going into the business for commercial reasons?

The chief ingredient of success in the oil palm plantation industry is the use of seeds or seedlings with a high production potential. The production of the planting materials at maturity is determined by the quality of their parent palms. This is the secret of profits in the oil palm plantation business. Most Nigerian oil palm plantation entrepreneurs don't care about their planting materials. Anything would do. The roadside nursery nondescript seedlings available at low cost are often the first choice of both our peasant and medium-scale oil palm farmers. In the present communication age, this is a classic case of garbage in, garbage out.

Records show that you worked at the Nigeria Institute for Oil Research and Federal Ministry of Agriculture, and also developed hybrid seedlings for improved oil palm.

I was trained by NIFOR. They sponsored my university education (University of Ibadan, 1962-65) and sponsored me to Michigan State University, USA, in 1967. I got my PhD (UI)in 1977, but when I left to work with the Federal Ministry of Agriculture, I was in charge of all the tree crops in the country. I went everywhere: Ivory Coast, Malaysia and the UK, where I got the inspiration that when I retire, I'll continue with research work. When I went to Malaysia in 1977, I found out that the weather was equitable; not too dry and not too wet. When they have three weeks dry period, they begin to shout 'drought.' When I got to the ministry, I applied to NIFOR to give me seeds, but there were instructions that I shouldn't be given.

Why?
They didn't want me to start a research on them or produce them. In 1973, some researchers, led by an Indian, who was a plant breeder in Kuala Lumpur, came to NIFOR, and when he came, they were looking for our seedlings and they collected some and went. All they did was that they collected them to improve their own, not that they didn't have. In 1989, NIFOR was celebrating its golden jubilee and it was there that I got the grip on the idea that had been germinating in my mind. The dura is what we have in the wild. Occasionally, you come across the tenera, which is a combination of the dura and the pisifera. The tenera is the ideal commercial planting material as its fruits have high oil content, but its bunch production capacity is largely dependent on the genetic quality of its parents. In South-East Asia, no farmer will plant the dura. Okomu Oil is also cutting down the old trees, Presco (Oil) is importing from other places too. You see, the oil palm is a peculiar tree with its three distinct types based on fruit forms. Each type is monoecious, that is, individual palms bear separate male and female flowers on the same plant. When in production, it bears large, spiny, coloured bunches, but it's the fruit forms that indicate the yield potential of each plant.

Part of the problem here in Nigeria is that tree crop farmers don't readily appreciate the value of high quality planting materials and often use nondescript illegitimate seeds or seedlings obtainable anywhere almost at no cost. In the case of oil palm, any planting material will do; dura or whatever. And, the appearance of non-producing palms in their plantations does not strike our farmers as odd or questionable and the scourge of overall low yields continues.

What has become known as the Allissee pedigree hybrid began as a recording of yields and analysis of fruit branches of several identified dura palms in our plantations over four years, which enabled us to select preferred parent pals. It was then possible to start an authentic pedigree tenera hybrid seed production programme. Allissee pedigree hybrids are the offspring of genetic crosses between known individual dura (maternal) and pisifera (paternal) oil-palms. The genuineness of their heritage is based on a universally accepted fact that all true dura and pisifera genetic crosses of oil palms produce 100 per cent tenera hybrids.

What is the role of the Federal Ministry of Agriculture, or what some consider as the duplication of the energy ministry in some states, vis-a-vis agricultural growth and power generation?

This is a very serious question you asked. Take the ministry of agriculture for example. They didn't send me to Ivory Coast with any clear cut plan. One minister, during the (Alhaji Shehu) Shagari period, called me and said, 'Go to Ivory Coast and study how they are doing this gigantic plantations.' I went and for three weeks, I was there doing that. I came back and submitted my report. Before my letter got there, the minister had been transferred to commerce. But that was no reason that whoever came should not have taken it, but simply put, there is no continuity here.

Is the problem isolated or part of endemic decay that some people say has come to be in Nigeria?

Look at Edo State for example, Adams Oshiomhole came and said he wanted to do this and he went ahead about it well, same for (Rotimi) Amaechi in Rivers. Jonathan is showing some traits, but we can't praise him yet. Lack of continuity and political will is the bane of our development. It was easy to bring back the attainment, but where leaders and followers alike lack the terrible, but the lack of political will is what is setting Nigeria back.

When you ruminate on some of these things, do you have regrets?

My frustration is that when I was in service, I had not discovered this (pedigree hybrid), and now very few private concerns benefit from the knowledge. Since 1989, I've been engaged in a research and development efforts aimed at improving the productivity of oil palm in Nigerian plantations. I had the advantage of research management training and experience in oil palms over 14 years at NIFOR and subsequent association with several research establishments and commercial oil palm plantations in Ivory Coast, Malaysia and Papua New Guinea. The result of this tedious and time consuming effort is the emergence of the Allissee pedigree hybrids, which I would have wanted the country as an entity to benefit from.