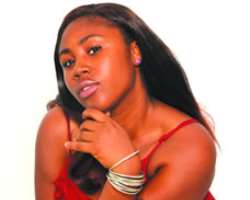 This is the question most of the guests who saw talented movie actor, Yemi Solade and the winner of the talent hunt show, The Next Movie Star, Liberia's Avenette Sirleaf together at the birthday bash of Prince Jide Kosoko, at the White House Hotel in Ikeja, Lagos are asking.

http://nollywoodgists.com was informed by a source who was at the bash how the duo clinged together whispering sweet nothing to each other all through the night, fueling suspicion that there is a chemistry between them. Even when guests were called to pose with the celebrant for photographs, both of them left together for the stage.

This growing conviviality between the two stars, kept the guests at the occasion to start asking what is going on between Yemi, a married man and the Liberian movie wannabe.

Avenette turned instant celebrity late last year when she won the reality TV show. The 26-year-old orphan was presented with a star prize of brand New Kia Rio and a whopping sum of $5,000