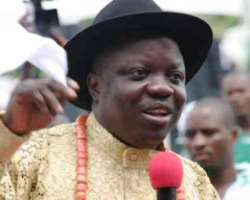 Of all the people from which to hear fulminations against Delta State Governor, Dr. Emmanuel Uduaghan, one would have least expected it to come from the State chairman of the ruling Peoples Democratic Party (PDP), Chief Peter Nwaoboshi. But the

two men are on a collision course, in the heart of a power struggle that is tearing the Delta State PDP apart, in the countdown to State, Ward and Local Government conventions scheduled for January 7, 14 and 21, 2012 respectively.

With only four months to go for the PDP national Executive Committee re-organization exercise to overhaul the party machinery by bringing in new blood into the leadership, the party leadership is in shambles. Dependable PDP sources told Huhuonline.com that the State chairmanship position has been zoned to Delta Central, meaning Nwaoboshi is already knocked out by default, but although authority forgets a dying king, the incumbent is not going down quietly, and has vowed to take the Governor down with him.

At the center of the storm was the list for cabinet nominees that were submitted by the State for consideration by President Goodluck Jonathan. The State party chairman has complained grudgingly in both his public and private comments that he was not consulted before the ministerial-nominees list from the state was drawn up and sent to Abuja. "I received over 400 telephone calls about the list. I was shocked because I don't know anything about this list. "I told the people to remain calm and as chairman of the party, I was not aware about the list."

The list which contained the names of the governorship candidate of the Action Congress of Nigeria, ACN, Chief Ovie Omo-Agege, a critic of the Uduaghan-led administration, who emerged third during the April governorship election. , Chief Godwill Obielum, who contested governorship during former governor James Ibori's era, Chief Solomon Ogba, Young Daniel Igbrude, a former Speaker of the Delta House, who decamped to the Democratic Peoples Party (DPP), Mariam Nneamaka Ali, who lost her senatorial bid to Dr. Ifeanyi Okowa, Echegile Godson, Elder Godsday Orubebe, Faith Tuedor-Matthews, Williams Makinde and Elizabeth Uvoh-Gardner. In the said list, only Elder Godsday Orubebe, said to have been anointed by elder statesman, Chief Edwin Clark was appointed as Niger Delta Minister.

But the Governor has come out categorically to state that the party chairman's account with the series of events both before and after the list was constituted and sent to Abuja was inconsistent with the truth. Speaking through his Chief Press Secretary, Mr Sunny Ogefere; Governor Uduaghan said: 'The Governor takes full responsibility for the 10 names nominated from the state and wished to state that there was no pressure from any person or quarters, including the Presidency in the nominations made.'

Another reason for the ruckus was the disagreement between the two over the appointment of a former member of the state House of Assembly, Princess Pat Ajudua as a member of the state executive council. Nwaboshi had attempted abortively to scuttle the nomination process with his allies in the State House of Assembly. The confirmation was widely viewed as a sleepy sideshow - a mere formality that would put Princess Ajudua into office. Instead, the issue became something far more unsettling to the PDP: a referendum on the Governor and the party Chairman that highlighted the surprisingly raw emotions of members of the Delta State House of Assembly.

Sources told Huhuonline.com that in an attempt to assert his leadership in the party, Nwaboshi hired his Trojan horse; Ken Mozea to hold down Ajudua's nomination by the state legislature. But the Speaker, Hon. Victor Ochei scuttled the plot by carefully denying Ken Mozea the opportunity to make comments or move any motion on Princess Ajudua's status.

During the screening exercise, a mild drama ensued as frantic moves by the member representing Oshimili North constituency in the Assembly, Mr Ken Mozea, a known rival of Princess Ajudua's to make observations on the House floor were rebuffed by the speaker. Mozea had raised issues saying, 'Mr Speaker, it is un-parliamentary and untraditional to be denied the privilege and honour to present the Commissioner-nominee from my Council. I don't think it is proper to shave a man's head in his absence.'

In response, the Speaker said: 'Member representing Oshimili North, by the grace of God, I am the Speaker and I rule from the chair. The rules were handed to me for interpretation. I have not finished and you are castigating me. Mrs Pat Ajudua, the immediate past Minority Leader of this House, because you served this House meritoriously, take a bow and go.'

Reacting to the on-going schism between the two men, Uduaghan said Nwaboshi's frustration and unhappiness was understandable, saying Nwaboshi just does not know how to pick his poison. He regretted that Mr. Nwaboshi is acting the script of Elder Godsay Orubebe, who is aspiring to be Governor in 2015.'But this not possible as there is zoning arrangement in the Delta PDP; I am from Delta South; Orubebe is from Delta South, it impossible for one region to produce two Governors in succession. As a result, they have attempted to annul the Jan 6 election, to pave the way for a re-run, during which Orubebe will now be eligible run in 2015. And this sinister plot was hatched by Chief Edwin Clark.

'Mr. Peter Nwaboshi, will remain the PDP chairman in Delta state, until the party`s next convention… if at the next convention Mr. Nwaboshi is re-elected, he will remain the party chairman, but if he is not returned, someone else will take his place; this is democracy no one can stay in office perpetually,' Governor Uduaghan told Huhuonline.com by telephone.