Atiku: IBB Is A Pillar Of Unity, Stability 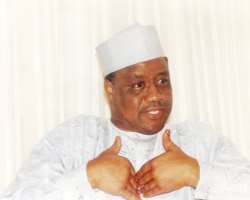 The former Vice President, who stated this in a good message on the occasion of Gen. Babangida’s 70th birthday said that even after leaving office, Gen. Babangida has not lost his zeal and energy in his avowed commitment to the unity, stability, peace and progress of the nation.

According to Atiku Abubakar, Gen. Babangida is one of the initiators of zoning and power rotation in 1999 because of his unwavering faith in the right of every section of Nigeria to produce the President through such fair, equitable and democratic method of sharing power.

Atiku noted that Babangida’s critics should assess him more objectively and with an open mind, thereby appreciating his great achievements and legacies.

Atiku, who was the northern consensus candidate in the struggle for the Peoples Democratic Party (PDP) ticket in January of this year, said when critics allow prejudice to influence their attitudes, they might not be able to appreciate that Babangida’s achievements are far greater than his perceived shortcomings.

While noting that there is no leader who is totally perfect, former Vice President Atiku Abubakar advised Nigerians to develop the culture of appreciating the contributions of their leaders and at the same time forgive their shortcomings.

He prayed to God to grant Babangida more good health and long life in his abiding faith in the unity and stability of Nigeria.