MY MANDATE, BY COMMUNICATIONS & TECHNOLOGY MINISTER 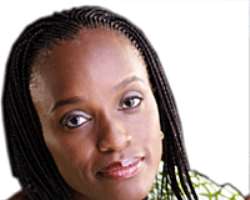 The Minister of Communication and Technology, Mrs. Omobola Johnson has thumbed up for the nation's telecommunications industry, saying that the sector, in just ten years, has exceeded the contribution of manufacturing, banking and solid minerals put together with a total contribution of 8.2% to the nation's gross domestic product.

She said this at the 10th edition of Nigeria Telecoms Anniversary Award Night organized by publishers of Nigerian Telecomnews in Lagos, at the weekend.

Mrs. Johnson, who delivered a keynote address at the occasion on the theme: Nigeria, to Technology Age traced the origin of telecommunications in Nigeria to1880, when the colonial masters established a telecoms infrastructure to serve colonial trade and administrative functions , noted that the eventual launch of the National Telecommunications Policy in 2000, which crystallized into the licensing and establishment of Global System of Mobile communications, GSM operations in Nigeria in 2001 has not only contributed immensely to the economic growth of the country, but has equally brought honour to the nation as one of the fastest growing telecoms market in the world with a subscriber base of 90 million, rising from 400,000 active lines in 2001.

'All this in ten years and indeed these achievements are worthy of celebration. But as we celebrate these achievements we can't afford to rest on our laurels. There is still much work to be done as we move Nigeria and Nigerians to the technology age,' said the minister.

She also noted that Nigeria is slowly making the migration, from a predominantly voice-based telecoms market to data communications, which brings in social and economic development to the nation.

For her, the creation of the new Ministry of Communication and Technology, by President Goodluck Jonathan, is a clear recognition of the role ICT will play in the socio economic development of Nigeria, by moving Nigeria to the technology and knowledge driven age, in a way and manner that benefits Nigeria and Nigerians regardless of status, wealth and geographic location.

She listed the mandate of the ministry to include development of appropriate policies that will facilitate the build-up of a ubiquitous, reliable and cost effective infrastructure across the country; drive, support and encourage the utilization of the infrastructure through wide spread ownership of ICT devices; digital content production; application development and the deployment of public and private services on the infrastructure and also to leverage ICT to drive the effectiveness and efficiency of the public service.

While recognizing the work done by others in this regard, the minister said ' we have been able to literally 'hit the ground running, by very quickly leveraging on what is on ground, as the ministry is to collaborate with a few national and international experts to finalize the draft policy report of the committee set up by the former minister of information and communication, to review and update the existing National IT Policy, to enable them deliver a National ICT Policy for Nigeria.

According to her, key to this policy and recognizing the convergence of information and communication technologies will be policy direction and strategies, on how to roll out sustainable backbone and broadband infrastructure, and also last mile infrastructure, while optimizing the utilization of scarce frequency resources.

Mrs Johnson further noted that Nigeria has already developed a robust Strategic ICT for Development Plan with articulated and clear strategies for how ICT can be deployed to address challenges and more importantly, opportunities in the health, agriculture, education, human resource development, e-government sectors amongst others.

In all of these strategies, the minister said there are clear opportunities for jobs and wealth creation for intending software developers, network engineers and technicians, computer scientists, computer technicians, call centre operators, business process outsourcing specialists, digital content creators, manufacture and assembling of digital devices, particularly for our youthful population who are very comfortable with these technologies.

As part of her strategy to achieve set goals of the Federal Government, Mrs. the minister revealed that the ministry's focus would be on government agencies charged with both the regulation and policy implementation. And quite importantly, she said that part of her focus would also be the industry stakeholders to align the ICT4D Strategic Plan with the new ICT policy to move very quickly from strategy to execution.

Highlight of the occasion was presentation of awards.

In the second category, the Nigerian Communication Commission, NCC was recognized as the consumer care agency, Etisalat emerged Telecom Innovation Company of the year, while the best mobile-bankin award went to Intercontinental Bank.

Also in the third category of the awards, MTN came top as the Best Telecom Brand of the Year, while Starcomms Nigeria grabbed the CDMA Mobile Company of the Year award; and AirtelNigeria emerged best in customer service operator of the year in that category, where as Globacom emerged as the Society Friendly Network of the year.

Other awards presented at the occasion were CEO of the year award, which went to Steve Evans of Etisalat and Silver award which was presented to Paul Usoro,alegal practitioner.However, diamond awards went to Ernest Ndukwe, Bolaji Balogun and Mohammed Halibut among otherss.

Present at the ocasion were former ministers, ambassadors, captains of industry in ICT, banking, energy and investors, including Amb. Segun Olusola and Chief Alex Akinyele.Earlier in his address, the organizer of the event, Otumba Abiodun said that the award was meant to reconnice excellence and hard work in the nation's ICT industry.