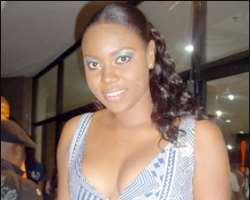 IT'S BEEN barely three years since she hit the silver screens but Yvonne Nelson has quickly risen with her graceful personality.

Now the hottest on the Ghanaian movie scene, Yvonne has already starred in various top Ghanaian and Nigerian movies as well as in Ghana/ Nigeria collaborations and was also a nominee at last year's African Movie Academy Awards (AMAA) as Best Upcoming Actress.

Things are still going rosy for the stunning actress as she recently broke into the Ivorian movie industry. All along La Cote d'Ivoire did not have a complete movie industry as the country only focused on Drama and Cantata.

The people are now trying to build a well structured movie industry, and for their first movie production in collaboration with Nigeria and Ghana, Yvonne was the only actress invited from Ghana to be part of this historic movie.

Yvonne in an exclusive interview with BEATWAVES expressed enthusiasm in moving her acting career to a different level as she's eyeing acting in Hollywood.

“I love what I am doing. I really appreciate all the support and love that Ghanaians have shown me. I will continue to make them proud and I want to see all of us get to the top. You never know, it's likely you will be seeing me in Hollywood one day. I still want to go the extra mile to make Ghanaians proud,” she remarked.

In her early 20s, Yvonne hails from Cape Coast in the Central Region. She had her basic education at St. Martin De Porres in Dansoman where she currently resides. She then continued to Aggrey Memorial High School. She is now in her third year at the Central University College reading Human Resource Management. She is also into designing. Her colours are pink and black.

However, her call into movie line, she indicated, was not a dream come true. “I never dreamt of becoming an actress. I had no interest in it. I was rather into music. Back at Aggrey Memorial I used to rap on stage. Anyway, I am not surprised I am into acting since it's all about showbiz.”

In 2005 Yvonne partook in Ghana's prestigious pageant - Miss Ghana - but could not a clinch the crown. She sprung onto Ghana's rising Ghollywood after playing a supporting role in the movie “The Return of Beyonce” which featured the likes of Van Vicker, Jackie Appiah, and Nadia Buari among other top stars.

“I never went for an audition for movie. I was just going to have lunch somewhere one afternoon and there was an audition going on. So the producer saw me and was like 'are you here for the audition?' And I said no. He asked again 'are you sure?'

I said yes, but he later managed to get my number and called me. So I thought ok let me try my hands on it. That is how it started. I have not regretted it. I have no regret,” says Yvonne.

Before then she had auditioned at Farmhouse for a TV series called 'Fortune Island'. That series however delayed as it did not come out till she went into mainstream acting. Her first lead role in a movie was in Princess Tyra, which shot her to fame. Within a period of two-and-a-half years she had starred in over twenty (20) movies.

She has also starred in Crime to Christ; To Love and To Cherish with Genevieve Nnaji; Festival of Love; Local Sense; Golden Adventure; Tears of Womanhood; Keep My Love; Girls Connection; Princess Tyra; and The Return of Beyonce.