I Never Had A Father -Timi Dakolo 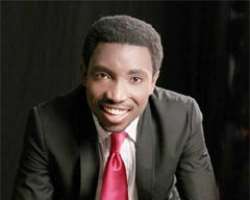 Quite interesting and fun to be with, Timi Dakolo, the winner of the first ever Idol West Africa musical TV reality show, has started showing what stuff he's made of with the release of the single, 'Let It Shine.' In this interview with Reporter, Gbenga Bada, the 27-year-old singer tells his story, his love for his late grandmother and why he's working with talented producer, Cobhams Asuquo.

What has music brought you?
It has brought me fame, it has changed me and made me more mature.

What was growing up like?
Growing up was tough but okay. You can imagine growing up with your grandmother; I was actually born in Ghana but raised in Port Harcourt by my grandmother. She made me work at my tender age and made me realise that only hard work pays. She also made me realise that there isn't any shortcut to success, she'd beat me over little things and pardon me for grave offences. I knew she loved me and wanted me to grow up independently and strong. I worked hard; I missed school because of non-payment of school fees; I had no toys, but one thing that I had and many people lacked was love. My grandmother loved me and she raised me with so much love, discipline and the fear of God. She had instilled all this in me at a tender age.

Did you ever think you could be where you are now?
Well, I would tell you that my grandma was fond of praying for me and telling me how great I was going to be. That really gave me courage and even though things were tough and rough then, my grandma's words encouraged and gave me hope. Then I started seeing the possibility of what I could become in life.

What about your parents?
I never stayed with them. I never had a father in person because my late granny told me that I was brought to her when I was seven to eight months old from Ghana. She was all I knew as a father and mother together and I didn't have any cause to regret living and growing up in her care. She would tell me that life would never give you what you want rather, it would take more from you.

What was her reaction about your involvement in the Idols, which has made you famous?

She didn't know because I didn't tell anyone I was going for Idols. I felt people would mock me if I didn't win. I also thought she might not support the idea. However, she died before I emerged winner and that pained me a lot because I would have wanted her there. She would probably be telling the angels that that's her son and she would no doubt be proud of me wherever she is.

Who is Timi Dakolo?
I'm here by the design of God. I'm a normal, young, humble and hardworking dude. I think the only thing that has changed about me is the fact that I can't buy my 'boli' on the roadside anymore or buy my La Casera or Gala in traffic.

What distinguishes you from other acts?
There are lots of musicians and music but what differentiates you from others is the love for what you do. For me, I would probably rehearse a song the same way I would be performing it. I also believe you can't give what you don't have. Aside that, one thing that also distinguishes me from others is the fact that I become one with the songs I sing.

What brand of music will dominate your album when it is released?

It would definitely be R 'n' B and soul.
Where do you see your songs in few years time?
I see a Grammy award in the near future.
What has been your role in improving things in the Niger Delta area where you grew up?

While I was growing up in Port Harcourt, there wasn't anything like militancy or militants. I have been doing all I can to lay a good example for other youths and make them realise that you can be the best thing to come out of the Niger Delta. I grew up and came out of the Niger Delta, I'm not doing what they are doing and I don't intend to, rather, I am inspiring others that dreams could be attained if you put your heart to it. I'm a message to everybody and a role model to many and I don't intend to deviate from that.

Where do you draw your inspiration?
The will to succeed gives me inspiration.
Why didn't you believe in yourself when you were going in for Idol?

I didn't believe in it because I felt I wasn't going to win. I have been to a similar show but lost, so I thought this might also be like the first but I didn't believe it until I passed through all the stages and was left among first 10 and the crowd started cheering me. It was more like they could see in me something I couldn't see and as such, I started giving it my all. At first, I didn't enter the show with the notion of winning, I was there to just see what I could do but after a while I found out I could do more and that became the zeal and passion.

Did you engage in singing professionally before Idols?

Yes I did, but it was all in my bathroom and inside the church and that was the highest I went.

Did you think about going commercial with it?
No, because then it was all for the fun of it. I sang when I felt like and it was for leisure.

So, it is correct to say Idols brought out the entire experience in your life.

How then did you get through the hurdles mounted by Dede Mabiaku and other judges?

There are two ways to this thing: You are either born with it or you learn it. So, I guess I was helped to bring out what was already in me and to be sincere with you, all the contestants from the last 24 to the last eight were good. They all had good talent and ability.

Did you at any point entertain thoughts about quitting While Idols was on?

Well, the truth is that we do songs that are not usual, we choose them probably because we like the lyrics or the sound and not that you know these songs. at some point I wondered if I could get through it. It sounded and appeared bleak but one way or the other, I got into the songs and allowed them get into me and in totality perform them to the best of my ability. Whenever I fell discouraged, I would just draw the inspiration from inside.

What has been the relationship between yourself and other contestants of the Idols?

It has been good. We still talk and call each other. We are just like we have always been, nothing has changed, nothing; not even the fact that one of us eventually became the winner.

What gave birth to your single 'Let it Shine'?
It is all about my story. I felt I needed to tell my story. When I was writing the song, I had it at the back of my mind that it should speak for me even when I'm long gone. Those are songs that are timeless and can always stand the test of time many years after you might have gone. I believe in evergreen songs that are also inspirational.

So, what is music to you?
Music is simply life for me.
When is your album coming out?
I am working with a great producer, Cobhams, Casquo who is helping me do what I love doing. I chose him because he understands my kind of music and he is extremely talented and would get the best out of you at all times. I'm comfortable with him and to get the best out of me, someone of his person and experience needs to guide me through. The Sony BMG contract just didn't work, I don't hold any grudge against anybody and I believe yesterday has gone and let's all face today. I have moved on with my career, although it would have been the best thing to happen to anyone but it's okay.

So, is there any record label responsible for your music at the moment?

No. I am working on my album at the moment and everything that I am doing is solely by me.

Aside the record deal that didn't come through, were all other prizes given to you?

Yes, all other prizes were given to me but just like I said, the contract was the best, it was like the big meat in the pot of soup. It's every musician's dream. Contracts like that don't come easily.

What's your take on the Nigerian music industry?
It's actually growing faster than anyone can imagine. We are leading the way and setting the pace in Africa because you find out that virtually all award ceremonies have one or two Nigerians grabbing one or two. We are not where we used to be just as we are not where we should be but it is growing so fast and it could and would be better.

How has it been with the female folks?
It has been good and I relate with them just like any other person would do. It has not been easy but I am just trying to be the best man that I can be.

Has there ever been any ugly incident with any one of them?

No, not any that I can remember, but I thank God because I know my right from my left.

What are your projections for your musical career?
I see myself bigger than the Nigerian artiste, I see myself opening shows at the Madison Square Garden, international tours, make chat topping albums and sing evergreen songs. I see myself getting bigger than anyone's imagination.