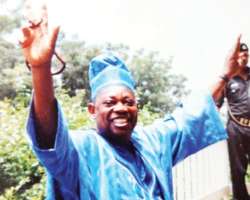 SAN FRANCISCO, August 10, (THEWILL) – One of the daughters of the presumed winner of the annulled June 12, 1993 Presidential Election, Mrs. Hafsat Abiola-Castello has called for a speedy trial of the former CSO to the late military dictator, General Sani Abacha, Major Hamza Al-Mustapha, who prosecutors have alleged ordered the slaying of Kudirat Abiola, one of the wives of Bashorun MKO Abiola.

Hafsat, a Special Adviser to Ogun state governor on MDG's, in a statement Tuesday said, the trial of Al-Mustapha reminds Nigerians of the dark days of the struggle to enthrone democracy in the land and accused Al-Mustapha of leading the ‘sadistic machinery’ of the murderous regime of Sani Abacha.

The statement to THEWILL reads:
“Delaying Justice
As we watch the drama play out in the courtroom with Major General Al-Mustapha, I am reminded once again of the challenge that a largely civilian movement faced in forcing the military back to the barracks during the June 12 struggle. For civilians, unversed in the art of war tactics like dissembling, camouflage, blackmail, intimidation, extortion, torture and assassinations are only ever encountered on the pages of Ludlum novels. Hapless and quite naïve, it took us a while to grow the healthy skepticism needed to secure the modest gains we made in 1999.

It seems that we have returned yet again to that age of innocence for as Al-Mustapha holds court, we all look transfixed. When someone who drove the sadistic machinery of the Abacha regime speaks we would do well to remember the antecedents from which he comes, to remember that he, mentored no less by General Abacha, would have learned well how to weave tales based on half-truths and sinister insinuations. In any case, even if his allegations are taken as fact, telling us that people were to be bought off following the death of MKO Abiola should not distract us from the fact that, however craven such behavior was, these people did not kill the symbol of the movement. And pertinent to the current court case, these people did not order that his wife, Kudirat Abiola, be assassinated.

Yet if the tragic murders of the twin martyrs are to have any consequence, the democracy they fought for should be made to work. It must be made to work for all citizens of Nigeria, not just for the ‘good guys.’ This means that the judicial process should move to resolve the question of whether Al Mustapha used the instruments of State to order that Kudirat Abiola be gunned down on the streets of Lagos in 1996. For if Al-Mustapha grows tired of the long wait for justice, he cannot imagine the sentiments of the woman’s seven children and of the rest of her family.”