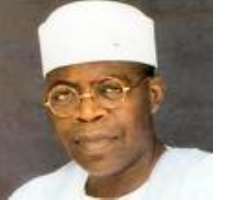 THE organisers of the yearly Diamond Awards for Comedy recently got an endorsement from Asiwaju Ahmed Bola Tinubu, the immediate past governor of Lagos State. Tinubu, recently accepted to be the Grand Patron of the Miss Ladi Gombe-led innovative awards, and was presented with an acceptance award by the organizers.

With his new position, Tinubu, will now be having inputs into the

organization of the event in subsequent editions. He will also be advising and supporting the organisers where and when necessary. Speaking on the

significance of the honour bestowed on Tinubu, Miss Gombe, the prime mover and initiator of the awards, explained that the ex governor was picked because of his immense contributions to the growth and development of arts, culture and entertainment in Nigeria and Africa in general. "Asiwaju is a gold fish and has no hiding place, even after leaving office his image and contributions still loom large.

"Even the organizers of Kora Awards located and made him their patron,

after Nelson Mandela vacated the post, for me that was a big honour. After thorough search and consultation, we all agreed that he is the best candidate for the post as our grand patron at Diamond awards.

"And we are also grateful that he accepted the offer wholeheartedly, meaning that he will bring his wealth of experience and exposure to bear on

our future events. We cannot thank him enough for all the love and support."

Meanwhile, Miss Gombe, also from Gombe State has revealed that the presentation of cash and other mouth-watering prizes to all the winners

of the debut edition of the comedy awards would hold soon. She stated that the elaborate event would be chaired by Tinubu and graced by eminent Nigerians as well as celebrities and dignitaries. "We are ready for the presentation, it's going to be grand and the date and venue would be made public soon. We have also started plans for the next edition_."