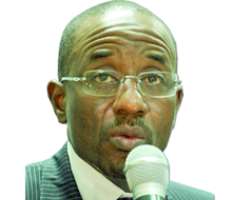 Last Friday's take-over of Afribank, Spring Bank and Bank PHB by the Nigerian Deposit Insurance Corporation (NDIC), and their subsequent acquisition by the bad bank-the Asset Management Corporation of Nigeria (AMCON), did strike the nation like a quake, throwing off balance the stakeholders who are still grappling with its aftershock.

Their shock is well rooted in the fact that this is coming almost two months to the September 30, 2011 recapitalisation deadline handed down by their czar, the Central Bank of Nigeria (CBN).

'What is the hurry about?', asked Mr. Olusola Obadimu, the Director General of the Nigeria-British Chamber of Commerce (NBCC), a concerned industry watcher who captured the mood of the bewildered nation,

According to him, 'Why can't CBN help re-stabilise the banks and sell them back to interested Nigerian companies or entities through transparent processes? You see, he who comes to equity must come with clean hands. Who are the people behind the 'bridge banks'? What have they run successfully before?'

Mr Femi Awoyemi, the Managing Director of Proshare Limited, for instance, stated that it was only Mallam Sanusi Lamido, the Central Bank Governor, who can tell Nigerians why he has to reverse himself on the issue of recapitalization of banks fixed for September 30, 2011. He wondered the basis upon which the licences of the banks were revoked by the apex bank. He said he was at a loss to explain the development to the international business community who have investments in the country that the authorities could just wake up one morning and nationalize their investments in the capital market.

He querried: 'What happens to foreign shareholders who have equity in these banks? Have the shares of the banks been delisted in a situation where limited liability company is taking over a public limited company.

Awoyemi explained, for instance, that if Spring Bank is adjudged to have failed as an institution, it was an indication that the CBN itself, which has been running it since 2007, has failed.

He pointed out that since the time of Suleyman Ndanusa to the present time, almost all the managing directors of the bank, except Charles Ojo, have been appointed by the CBN and if they have failed to pull the bank out of the woods, it means CBN does not have the answer for resolving distress in the banking industry.

He recalled that from 2007 to date, Spring Bank has increased its loss from N22billion to N92billion while still under CBN management and supervision.

Awoyemi also queried why the Central Bank that set up AMCON to deal with delinquent loans could not allow the process to go full course before coming back to take over the banks into which it injected about N620billion two years ago. As if to stop the likes of Obadimu and Awoyemi from asking too many questions, AMCON yesterday quickly announced board appointments for the bridge banks.Former Managing Directors of three top banks, Mr Jacobs Moyo Ajekigbe, Mr Falalu Bello and Mr Emeka Onwuka are to head the new boards.

The statement adds that the corporation 'has concluded arrangements for the injection of N679 billion into the three banks tomorrow (today). Additionally, the Central Bank of Nigeria has granted the same interbank guarantee as it did to the banks that have signed Transaction Implementation Agreements (TIAs) until December 31 2011. The banks are therefore fully capitalized, strengthened and well positioned for future growth.

The newly appointed boards are entrusted with the mandate to manage these banks along best commercial practice to compete effectively in the Nigerian banking sector and provide quality service to customers. Depositors are again assured that their deposits are safe, and employees are also assured of seamless continuity of business operations and job functions.'

But this will not silence many critics who came down heavily on Sanusi, saying the hand may be that of NDIC, the voice is certainly that of Sanusi, who had hinted recently that the rescued banks who fail in their ecapitalisation bid would be nationalised. For instance , a banker who does not want his name in print slammed him thus:

'The withdrawal of the licences of these banks has vindicated those who believe that Sanusi has a hidden agenda. Since the Northerners lost out in Soludo's consolidation process, the only avenue for them to stage a comeback is through Sanusi.Very soon the Northerners will feature prominently in the board composition. These banks may end up being sold to the northerners.'

Stock market
Market analysts fear that the decision of the regulator to 'liquidate' these banks might upset the financial system and result in further share price losses that may crash market value of entire banking sub-sector to less than N2 trillion. 'We expect the action of the CBN to cause a stir in the Nigerian banking system and indeed the economy as the probability of a run on those banks is very much likely in the coming week. These banks together account for 5.8 per cent of the Nigerian Banking industry by total assets and 7.9 per cent of industry total deposits,' Afrinvest stated in its review.

Commenting further, the firm of investment managers and stock analysts said 'We believe the impact of this action on the equities market will be markedly negative, given the challenges in the global economy and the renewed concerns about the downturn in recent weeks. 'This assumes even more frightening proportions when considering the apparent lack of investor confidence in the domestic retail segment. We therefore expect to witness massive sell-offs in the shares of these liquidated banks in the days ahead', the report concluded.

Meanwhile, in a swift exercise of its statutory role to protect investors, the Securities Exchange Commission (SEC), yesterday, also announced its approval to place shares of the nationalised three rescued banks on full suspension and those of surviving rescued banks on technical suspension. By this development, the shares of nationalised Afribank Plc, Bank PHB Plc and Spring Bank Plc under full suspension will no longer be traded on the Exchange.

A statement issued by the Commission, however, assured investors not to panic, stressing that the action of NDIC, CBN and AMCON are significant steps towards the resolution of the banking crisis.

The statement further reads: 'As a consequence of the above actions and to maintain market integrity, the SEC has approved the placement of the shares of Afribank Plc, Bank PHB Plc and Spring Bank Plc on full suspension. Full suspension means that there will be no trading on the shares of the said companies.

'The Commission equally notes that in compliance with the CBN requirements for recapitalization, Finbank Plc, Intercontinental Bank Plc, Oceanic Bank Plc and Union Bank Nigeria Plc have executed Transaction Implementation Agreements (TIAs) with core investors. 'To protect investors, the SEC has approved that the Nigerian Stock Exchange (NSE) should place the shares of these banks on technical suspension. Technical suspension means that trading on the shares can continue without any change in price. The Commission remains committed to its mandate of investor protection and market development'.

Mr. Chidi Ajaegbu, the second Deputy Vice President of the Institute of Chartered Accountants of Nigeria (ICAN) said: 'From this perspective it means that federal government feels that the recapitalization process and reform should take a different direction; from what Sanusi is doing now. Obviously, for CBN to have come to say that they support the decision means that they are not privy to repositioning. What that means is that the Presidency and Federal Ministry of Finance felt that it was time to be involved for effective repositioning of these banks.

'I have always been of the opinion that the objectives of banking reform were good, but the strategies deployed by CBN are faulty and actually very frightening indeed, myopic and self-served destructive. So, is like Federal Government has come to that conclusion for them to take independent decision that to intervene is the best decision on the vocational crisis to put in proper perspective wihout consulting the apex bank.

Potential implications:
The government have said it clearly that the operations of these banks won't be interrupted. Essentially, I feel more excited that before the pronouncement of September 30 deadline, something is been done. I think it is really a good move; it shows the direction the reform is taking. It is moving so fast and I am not sure of the implementation of their strategies to achieve their objectives. I don't think we have done things the way we should do them.