RESTORING PEACE TO THE PLATEAU 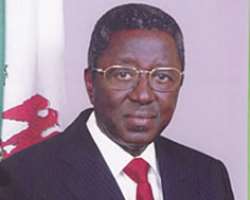 Governor Jonah Jang
It is not an exaggeration to say that Plateau State has not had a vibrant legislature since 1999 when the present democratic dispensation came into being. Law-making has been comatose in the state which has witnessed a series of crises. Before the fourth session (the 1999 House), the state's legislative arm did not witness many activities because it was interrupted by constant military incursions.

But increased political tempo in the country started with the return to civil rule in 1999. In Plateau State, hardly had the fourth assembly been inaugurated than the ethno-religious crises started. They increased in tempo, intensity and dimension. The simmering political crises, with strings of events, which culminated in state of emergency in 2004 and impeachment in 2006, began with agitations over the emergence of Chief Joshua Dariye as governor of the state in 1999.

He was considered a minority within a minority. As the governor of the state, he faced opposition from all sides; even those considered as elders from the bigger tribes did not allow him a breathing space. The result was that Dariye had to use all in his possession to gain acceptability, including state resources, to fight for legitimacy. Development in the state was stagnated as 'settlement and appeasement' became the order of the day.

Unfortunately the state legislature, which was supposed to be an arbiter and at best a stabilising force because of its role as the watchdog of the executive, became embroiled in the crisis. The assembly turned to be the whipping boy because it did not do the biding of some people, who simply wanted the legislators to remove the governor to pave way for a stooge to take over the governance of the state.

The opportunity to remove the former governor was provided when 14 of the 24 members, who were loyal to him, made the costliest mistake of defecting from the ruling People's Democratic Party to the Action Congress (now Action Congress of Nigeria). Eventually those 14 loyal legislators had to be shoved aside and six others were coerced and intimidated into foisting an illegal impeachment on him. That was how the assembly ended without anything to show for it.

The real test for Dariye started was when the first and only multi-million ultra modern main market in Jos, the state capital, was burnt in February 2001. That singular act denied the state of the much needed revenue and many citizens were robbed of their means of livelihood. The state has yet to recover from this and its attendant consequence, including how to resettle the displaced traders and people that lost their homes to the crisis that erupted in the Jos North Local Government area on November 7 of the same year.

If Dariye's first tenure was crisis-ridden, then his second adventure was no less. After the 2003 general elections, the same problem started. The killings in Yelwa in May 2004 culminated in the imposition of a state of emergency and suspension of democratic structures in the state.

While announcing the emergency rule on May 18, 2004, former President Olusegun Obasanjo pointed out that the situation in Plateau State then constituted a challenge to the country's democracy and negated the norms of national human interaction. He had pointed out that the situation contradicted the tenets of civil society and devalued opportunities for peace, stability, co-existence and social justice.

If these were some of the reasons given by Obasanjo for declaring an emergency rule on a democratic dispensation, then the situation may not be said to be different today. The imposition of an emergency rule did not solve any problem. It only satisfied the desire of a few who wanted to massage their personal ego because if the emergency rule brought peace, the peace was temporary.

The situation remained the same, if not worsened until the sixth assembly was inaugurated. Of course like the ones before it, the Sixth assembly soon found itself enmeshed in the same political crisis that bedevilled the ones before it. It soon snowballed into a personal fight between Dariye's successor, Governor Jonah Jang, and his deputy, Mrs. Pauline Tallen, over who controlled the assembly. The Jang/Tallen imbroglio dominated political discourse until the 2011 elections.

Faced with divided loyalty, the assembly under Mr. Emmanuel Go'ar, as the speaker, could not check executive rascality and infringements on their rights and duties. The assembly looked the other way while the governor held sway, abolishing newly established districts and chiefdoms and closing down the only university in the state. Many students were sent out roaming the streets. Business of law-making was relegated to the background while camps and loyalties switched from one side to the other continuously. The assembly was a toy in the hands of the executive as the members looked the other way; the executive had its way.

All these helped to create tension and political instability in the state. The result was the bottled-up anger that led to the November 28, 2008 crisis on the eve of the local government elections. The killings that attended that elections led to a reprisal attack that has continued even till date.

It is a known fact that the Jang/Tallen imbroglio continued even after Istifanus Mwansat upstaged Go'ar in a palace coup and it dominated the affairs of assembly until the end of that dispensation. It also culminated in Tallen contesting the election under a different party, while majority of the members of that assembly as indeed it happened with those of the fifth assembly had to defect to other political parties to enhance their electoral fortunes.

However, it is with cautious optimism that the people welcome the 7th session of the Plateau State House of Assembly. The fear that it will be business as usual may not be far -fetched because of the antecedents of past sessions. However, members have exhibited some signs of seriousness when they passed in a record time of two weeks, the 2011 budget, which was submitted to the Sixth assembly in September 2010 and which the members were not able to pass until that session elapsed in June 2011.

The Speaker, Mr. John Clark, a veteran labour leader and also a member of the Sixth assembly in an interview with our correspondent, pleaded that the new assembly should not be seen with the eyes of the past. According to him, the lawmakers will learn from the past.

Explaining the agenda of the seventh assembly, Clark said, 'What we will want to see is the restoration of total peace on the Plateau because we cannot do anything without peace. Without development, the people will be in serious jeopardy. By the grace of God, we want to enthrone peace that will be permanent.'

The Chairman of the House Committee on Information, Mr. Diket Plang, and his counterpart in the Public Accounts Audit and Petitions, Mr. Gondina Musa Sambo, also agreed with the speaker that peace is essential for development in the state and would do everything to see to the total restoration of harmony and peaceful co-existence in the state.

'We will not tolerate anything that will lead to a breakdown of law and order in the state and peace will be the cornerstone of our legislating in this 7th assembly. We have also realised the mistake of the past and we hope to be guided by it. History, they say is the greatest teacher,' says Gondina who was the Director of Finance and Supply in the House.

But as hopes are high that Plateau may witness better law-making, signs are ominous that the seventh assembly may not perform better than its predecessors. Perhaps it may be too early to judge as the speaker has pleaded, but the members' resolve to maintain their independence and do their job as it should be, will be tested with how they will be able to solve the incessant disregard to rule of law by the executive. The people are watching how the lawmakers will resolve a recent action of the executive who unilaterally sacked the Chairman and legislative arm of Kanam Local Government Area.

A member of the House, who spoke to our correspondent on the condition of anonymity, warned, 'If care is not taken, this assembly will be worse than the sixth. About 90 per cent of members are lackeys whose elections were bankrolled by the executive and so it will be difficult to check the governor. Can you imagine a situation where a House of Assembly has not been paid since inauguration and no member has been able to say anything? When an assembly cannot fight for its rights, how can it fight for the rights of others?'

As the state begins another democratic journey, all eyes are on the seventh assembly in its move to bring back the pride of the state, which was once reputed to be the home of tourism in Nigeria.