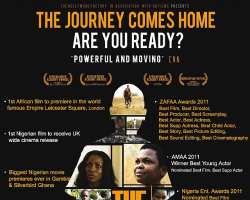 Beyond the premiere of 'Mirror Boy', the movie profiled internationally as the future of Nollywood, Silverbird Galleria will on Friday, August 5, 2011 become another stars arcade as the line up of stars and celebrities expected at the event is almost endless.

With increasing buzz and expectation as count down begins to the 'Mirror Boy' premiere, the producer of the movie Obi Emelonye and publicist Prestige Platform has stepped out to say the success of the movie will surpass all its earlier successes in UK and Ghana.

'Mirror Boy' was the first African movie ever to be premiered at the Empire Leicester Square in London, UK; it survived at the British cinemas for weeks, coming up among the top five in the first week and top twelve in the second week. It had a mind-blowing effect on the Ghanaian cinemas thereby making it the highest selling Nollywood movie of all time in Ghana. At the 2011 AMAA award, 'Mirror Boy' won the Best Young Actor Award and was nominated for the Best Film and Best Supp Actor. 'Mirror Boy' was nominated for Best Film and Best pan African Actor at the Nigerian Entertainment Awards 2011 and for her role in 'Mirror Boy', Genevieve Nnaji won the award for The Best Breakthrough Performance at the Monaco Films Awards.

Written, produced & directed by Obi Emelonye, an award winning UK based Nigerian film maker, 'Mirror Boy' is an enthralling journey as seen through the eyes of a London- born 12 year old African boy, Tijani. After a London street fight on 13th of June, in which a local boy is hurt, Tijan's mother decides to take him back their roots, to Gambia. On their arrival in Banjul, Tijan encounters a strange apparition, a boy smiling at him in a mirror and vanishing. Seeing the same boy in a crowded street market the next day sets in motion a chain of events, with Tijan finding himself lost. While Tijan's panic-stricken mother struggles to find her son, Tijan is left alone in the company of the enigmatic Mirror Boy, seemingly only visible to him. A cathartic climax helps TIJANI to unravel the mystery of the MIRROR BOY. It also provides him with a rather mystical explanation for the way his life has cascaded from the 13th of June towards this inter-twined fate with a father he has never met.