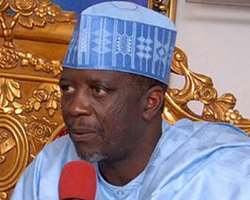 The experience of the immediate past Governor of Sokoto State, Alhaji  Attahiru Dalhatu Bafarawa, who is also an Action Congress of Nigeria (ACN) chieftain, with the EFCC, as told in this exclusive interview, is pathetic.  The Garkuwan Sokoto, and two-time Presidential aspirant, at his Abuja residence  last week, told Vanguard his worries about the anti-graft war responsibility handed Mrs. Farida Waziri. Excerpts:

In recognition of your contributions to the development of Sokoto State, you were installed as the Garkuwan Sokoto that is, The Shield of Sokoto Caliphate.  What are your duties as a holder of that title?

My duty as The Shield of the Caliphate is to bring peace, stability and development to the area.  I was turbaned as  Garkuwan Sokoto, which was endorsed by the Emir of Gwandu before I became governor of Sokoto State and the installation was performed by the Sultan of Sokoto on the 17th of August 1996.  The Emir of Gwandu conferred that titled to me on the 18th or thereafter in Gwandu.

Why did the turbanning authorization involve the Emir of Gwandu and not Sultan alone?

When we say Caliphate, it means the combination of Sokoto and Gwandu emirates.  So my title is not for Sokoto Emirate alone, I am the confirmed 'Shield of the Caliphate' that is Garkuwan Sokoto heads of the two emirates: the Sultan of Sokoto and the Emir of Gwandu.

And my duty therefore is to protect the interest of the people of the Caliphate.  That was why when I became the governor I changed the title of Sokoto traditional institution from Emirate Council to Sultanate Council and that was because we had a lot of emirates all over the place.  In order to differentiate between the superior emirate and the rest, I had to change it from emirate to Sultanate Council.  I effected that change.

What propelled you to do those things you were doing or was it as a result of future political ambition that later materialized in your 1999 emergence as executive governor of the state?

I believe that I was born to serve the people.  I came from a royal family where my father was the chief of his domain and by that, he was always at the service of the people.  So we his children copied from him what it means to serve the people, we learnt how to give service to the people My people noticed me even before I became governor.  It has been an inbuilt interest and that's why I am never tired doing it because I have been serving the people right my childhood even before I became the councilor representing my ward to the time I became the governor up till now. I will continue to do that until I die.

As an experienced poltiician having been a founding member of major political parties in Nigeria like UNCP in the General Sani Abacha era; the ANPP; the DPP and now the ACN, what is the way forward for Nigeria?

It's unfortunate that present day politicians in the country take politics to be a small-scale industry where they only care for themselves at the expense of the people and by so doing, they have automatically changed the meaning of democracy and the meaning of politics.  When you  are called to serve in politics, you are there to serve the people and not to serve yourself.  But unfortunately, people have taken it to be the other way round. They have taken it as just a small-scale industry where they can get easy money.

*Bafarawa
If you see what people in government are doing, you would be amazed.  Or have you ever seen members of the National Assembly fighting for their constituencies?  Have you found them fighting for government to get their roads constructed for them, or to get hospitals built, or for government to provide necessary amenities required by their people?  What we have seen so far is that they are there fighting for themselves and I hope that attitude will change with the emergence of the Seventh Assembly.

Politics is just something we have to fold our arms and watch because there is nothing that we can do.  If you don't have money to spend, you are considered as having nothing to contribute.  This is the nature of Nigerian democracy as at now and a lot of efforts should be made to correct it.

We are 12 years down the line with little or nothing to show for it.  As a two-time Presidential Candidate, what can be done to address the problems of Nigeria?

The problem with Nigeria is not in whether or not it operates presidential or parliamentary system of government.  We, Nigerian politicians, are the architect of our problems.  Before you say you want to become something, you must have a vision and you must have a plan of what you want to do, how you want to do it and measures that you will put in place to achieve it.  People just go on television or campaign grounds talking about what they want to do without vision and planning.  And this is where the problem starts.

Before you come out to vie for either president or governor, there must a political party for you to do that.  And that party must have its own manifesto and the contents of that manifesto is what you will implement in your government.  The party manifesto is very important because it is an embodiment of what aspiring party will do if voted into power and that is what the party takes to the INEC to get registered.  But unfortunately because we don't follow the rules, we end up making the system look as if it is the problem.

The party is supreme to everybody.  Whether you are governor or president, when you are a member of the party, the party is supreme.  Therefore, we have to apply discipline into our political parties: we have the ideology, we have the vision, we have the manifesto of what we intend to do for the people.  But people just write beautiful manifestos, take it to INEC office and dump it there just because they want to get their party registered.  Nobody has the knowledge, it doesn't occur to the electorate that they have to go through the party before they go to the poll to decide whether to vote for it or not.  What they are after is who the highest bidder is.

For the eight years that you governed Sokoto State, what were your major challenges and how did you get over them?

My major challenge was that I inherited a state that was in bad shape of economy.  I think I met only N20 million in the treasury of the state, there was even a dispute of paying salaries between the civil servants and the government when I took over the military.  That was the first major challenge I faced.

Also there was the problem of basic amenities; no potable drinking water.  The education system in the state was down; there were no even school furniture in primary and secondary as pupils and students of secondary schools were seen sitting on the ground while learning.  These were the challenges and roads were bad.

But when I took over in 1999 as the governor of Sokoto State, and we were aware we had about three million population of people by then, and we had only 30 indigenous medical doctors, which was very frustrating.