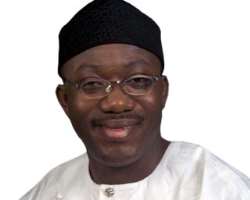 Governor Kayode Fayemi and one of his predecessors, Mr. Ayo Fayose, caused a stir at Ifaki-Ekiti on Friday as they showed up at the burial of the mother of former Governor Segun Oni.

Fayemi and Fayose, who were among other notable dignitaries at the funeral service held at the Methodist Church, Ilogbe, Ifaki, drew a loud ovation from the congregation, youths and miscreants who were at the ceremony.

The presence of the governor and Fayose, who were political enemies of Oni, was surprising to many because of the marathon legal battle, which preceded the ouster of Oni from office.

The ceremony provided Fayemi the opportunity to meet face-to-face in the public with Oni just a day after the ousted governor vowed to continue with the case he filed seeking the ouster of Fayemi.

Fayose, who is a prominent member of the Labour Party, had joined Fayemi and other politicians to campaign against Oni during the rerun poll of April 2009.

President Goodluck Jonathan, in a condolence message read on his behalf by the Director General of the National Drug Law Enforcement Agency, Mr. Femi Ajayi, asked Nigerians to emulate the virtues of Mrs. Oni.

The Prelate of the Methodist Church of Nigeria, Dr. Ola Makinde, said that the presence of politicians from diverse political groups showed that there was still unity in the country.

Makinde urged Nigerians to continue to pray for the unity of the country, saying that the country would be great again.

Senator Olu Adetumbi, who represents Ekiti North Senatorial District in the Senate, said that Oni was his friend and they were natives of the same town.

He said that being members of different political parties could not stop him from attending the burial.