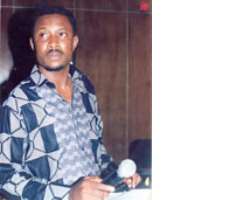 Ace Comedian, Uche Ogbuagu was recently appointed as Special Assistant to Imo State Governor, Rochas Okorocha. His Portfolio asSpecial Assistant / Chief Comedian set the ball rolling for the criticism towards the State Government. Many questioned the discretion of His Excellency on the portfolio's created.

In this Interview with Award winning Celebrity Publicist and renowned Political Blogger Joi John, Mr. Ogbuagu sheds light on his Portfolio and projects envisioned for the State.

Q:What are some of the notable highlights of your First week in office?

A:I started off with a tour of the State Capital to ascertain the true situation of things. I visited a number of Entertainment places owned by the State Government. Recently, I inspected the AMA J . K recreation Park and was saddened by the condition of the place. It is almost in shambles. I started out with AMA J K recreation Park because it is at the center of the State Capital and has potentials to generate income for the State.

Q: Could you give an insight to some of the Projects you envision to achieve in reviving the Entertainment Sector?

A:To start, we are going to build Comedy Corners around the State capital. I have also had talks with some Private investors towards the project for an Amusement park.

I am also proposing a name Change. This is a Rescue Mission and when you want to be rescued, you must be ready to be renamed. In fulfilling the plans I have for the Entertainment sector, I wouldnt want to depend on funds from the State Government. That has been my promise from day one.

Apart from AMA J.K recreation park , I observed that there was also another piece of land that the former Government intended to build a Park on . We will take over from where they left off and build a Park specifically for the Kids because that has been a gap in the Entertainment industry in the State. The kids do not have a play spot. You find that on Weekends, parents would take their Children to neighbouring States when we can create the same structures here. It is time for us to give the Children a sense of belonging. I want to go on record to state that the IMO AMUSEMENT PARK is going to be the center of attraction for all Children in the State and beyond and, that would be one of the legacies I would be remembered for.

His Excellency has asked for me to draft a proposal and submit to him for his Perusal. That, I will do in less than 48 hours from now.

Q:What do you make of this opportunity to serve the State?

A:I am seeing this particular portfolio as the only opportunity I have in life to prove myself. Should there be any other opportunity, I wouldnt mind. I am not looking for anything higher than this but if it comes my way, Glory be to God.

With the confidence and trust reposed in me by the State Government, I dont have any reason to fail. I want to assure all the citizens home and abroad that , the Lost Glory of Imo State is about to be retrieved.

I can confidently state that the office of the Chief Comedian of the State and Special Assistant to the Governor is one that will be most successful. At the breifing we had on Sunday with the Chief of Staff, I reassured His Excellency who was also present that, in 90 days he will be marvelled at the progress in the State as far as Entertainment is concerned.

Q: On a personal note, I read you were born a Stammerer but it is almost impossible to believe that. Our interview has gone so smoothly and I havent heard you stammer through any question. How were you able to overcome that?

A: (Laughter) Well, I stammer only when I am tensed up and under pressure. Mostly when I am broke. When I no get money. That is where nature surprises me a whole lot. I stammer ordinarily but once I am on air . . . on the Microphone or I am performing, everything dies off so I believe I am a Microphone person and that is the reason why my stammering will always respect my business and my calling.

Q: What are your final words to the Critics?

A: Most people in different quarters look for ways to pull me down. They say Uche Ogbuagu is not learned; he cannot speak good English and so forth. . . but, that it is typical. Normally, nothing good comes easy. One cannot know the strength of the other unless he has been put to Test. As a result oriented person, the important thing for me is results and I believe confidently that I am going to succeed. I will prove every naysayer that has been against my appointment, wrong and whosoever has spoken bad about me will turn around to speak good of me.