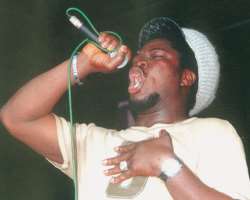 According to source, the gunmen arrived the Bola Street, Victory Estate home of Showkey at about 1.30pm, on a motor bike otherwise known as okada, and gained entrance through the main gate when Showkey's first son, Raymond Asiemo, who went on an errand, was about entering the house.

On arrival they were said to have asked the 14-year old Raymond for the owner of the house, at gun point and the boy told them that the house is an uncompleted building and that some people are working inside the building.

Source said Raymond went inside the building to inform Wale and one other person who were doing some renovation work inside the main building.

As soon as the two men who thought that the gunmen were policemen arrived, one of them fired a shot that hit Wale on the right arm and they fled on realizing that Showkey's security guard, who had scaled the fence, raised an alarm to attract neighbours.

The injured Wale was rushed to Royan Hospital, Ojodu and he was later referred to the Lagos State University Teaching Hospital, (LASUTH) Ikeja, where he died. Showkey, who was not at home when the incident happened, confirmed the report.

“I don't know their mission but my concern is, why did they kill Wale? It is terrible, I am sad. I can't say anything for now,” he reacted.