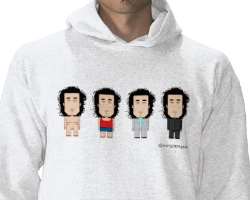 There is this strange but true story coming from the home of a top Nollywood actor who recently discovered that he has a grown up son somewhere.

The story is particularly pleasant for the top star who has been married for many years without a male child and to discover that a wild oat he sowed some years ago has proven to be the male child he always craved for.

This top actor who is a household name in the Nigerian make belief industry is also an item with women who will do anything to get close to him.

He has a special way of interpreting roles and at some point, was so sick that many of his fans thought he will never come out of the strange ailment but he managed to overcome the sickness and today is one of the most sought after actors and one of the best paid around.

The story has it that the actor's first marriage produced only female children and though he had reportedly vowed not to take another wife, he was said to have put another woman in the family some years ago and the pregnancy, as God would have it, produced a male child and the media was agog with the news of him finally getting a son.

According to our source, another pleasing surprise was on the way for the veteran actor when he recently discovered that he has another son somewhere which he was not aware of until the mother showed up with the boy and the discovery has been a thing of joy for the man.