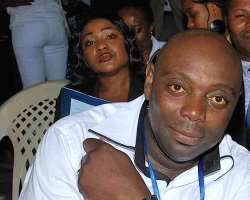 National President of the Actors' Guild of Nigeria, AGN, Segun Arinze, has condemned the invasion of Nollywood by some Americans to organize a reality show dubbed Next Nollywood Star.

Arinze claimed that the reality show, which involves America's Tracey Moore and Samad Davies as instructor and director respectively, is designed to defraud unsuspecting Nigerian actors.

According to him, “Nollywood is an organized sector with guilds and associations for the entire nucleus that make up the motion picture industry, so no foreigner can come into the industry without partnership arrangement with relevant guilds/associations, therefore the said reality show is viewed as fraud.”

Presido, as Arinze is fondly called, noted that AGN encourages partnership and creative developments, but frowns at dubious and fraudulent methods of achieving it. He therefore urged both AGN members and prospective actors to ignore the reality show.