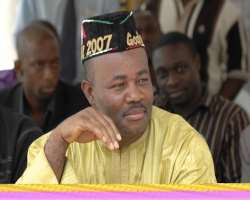 SAN FRANCISCO, July 19, (THEWILL) - The Action Congress of Nigeria (ACN) has described as very curious and perverse the ruling of the Akwa Ibom governorship election petition Tribunal, which dismissed the party's petition and that of its candidates, Senator Akpan Udoedehe and Dr. Samson Umana, and also affirmed the election of Godswill Akpabio as Governor of Akwa Ibom State, even when the petition is yet to be determined on its merit.

In a statement issued in London on Tuesday by its National Publicity Secretary, Alhaji Lai Mohammed, the party said the ruling of the Tribunal flies in the face of existing law and jurisprudence on the issue of applying for pre-hearing session, hence the party has instructed its lawyers to immediately proceed on appeal.

ACN appealed to its teeming supporters and Akwa Ibom State electorates who voted en masse for the party to remain peaceful and steadfast, saying it believes that justice will definitely prevail and the usurpers will be shown the way out ultimately by the appropriate court.

Explaining its amazement at the ruling, the party noted that the only ground upon which the Tribunal came to its decision is that the petitioners did not seek leave to bring the application for the Tribunal to issue pre-hearing notice.

''While our party, the Action Congress of Nigeria, and its candidates who are co-petitioners hold and will continue to hold the judiciary in high esteem, we consider the ruling of this Tribunal to be strange and in total variance with existing law and jurisprudence on issuance of pre-hearing.

''The provision of paragraph 47(1) of the first schedule to the Electoral Act pursuant to which the Tribunal set aside the order for pre-hearing session it had earlier issued has been part of the Nigerian law since 2007 by way of paragraph 6(1) of the practice direction number 1 of 2007.

''However, there is no legal or judicial authority in Nigeria that prescribes that leave must first be sought and obtained before an application for pre-hearing session can be made and granted. Indeed no tribunal or Court Of Appeal anywhere in the country since the practice directions were first issued in 2007 has ever held that a motion to begin pre-trial must be by leave of court because such a motion is taken outside the pre-trial session!

''The Ruling of the Akwa Ibom State Election Petition Tribunal is therefore not only new jurisprudence but also a very curious one indeed,'' it said.

ACN said it was even more strange that the same tribunal failed to consider the argument of the petitioners that in bringing their application, the 1st & 2nd Respondents did not seek leave to bring the application outside pre-hearing session. Yet, the same tribunal set aside the orders it had previously granted for the issuance of the pre-hearing notice on the sole ground that the petitioners did not apply for and obtain leave to determine the application.

''It would thus appear that to the honourable Tribunal, what is good for the goose is not good for the gander, assuming without conceding that the provision of leave is applicable to the application for pre-hearing session of the Petitioners.

ACN said it also considers as perverse that the tribunal granted an unsought-for relief by affirming the re-election of Godswill Akpabio when it had not even considered the substantive matter.

''The granting of this relief becomes even more troubling when compared to the earlier part of the tribunal’s ruling wherein it stated categorically that it cannot give what is not sought for by a party only to turn around on the point for the purpose of confirming the re-election of Akpabio when same relief was not sought by any party,'' it added.