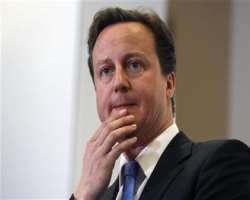 He is expected to discuss trade, aid and encourage President Goodluck Jonathan in his bid to reform the energy sector.

The two African economic giants, Nigeria and South Africa were former colonies of the United Kingdom.

Cameron is expected to depart Abuja on Tuesday for London.