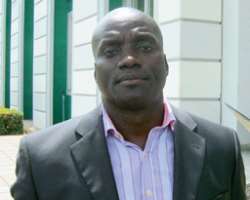 Steve Gukas is a producer and has been into film production for 20 years. With films like Keeping Faith, and Namibia: The Struggle for Freedom, which was shot in Namibia, he is a master story teller. He shares his experiences with KEMI ASHEFON

HOW did you come about the project, A Place in the Stars?

The project was conceived sometime in 1995 and it started then as a story and it was developed. The final script was written by a talented Nigerian writer, Ita Osaife. After the draft of script by Ita we had an international script consultant take another look at the script so that it had a rounded global appeal. The story line of the film is about a father-son relation with backdrop of corruption in Nigeria. It is a tale of redemption, a tale of a clash of values – the old versus the new.

Is there a comparison between the plot of the film and the Nigerian situation?

I think you are going to find a lot of parallels between the film and what is happening in Nigeria. In fact, our intention is to blur the lines between reality and fiction so that at some point you will wonder if you are watching a film or a reality show. This is because you will see events in the film that are every day happenings in Nigeria and current affairs.

How will the film have bearing on the family relationships today in Nigeria?

The film is about returning to values we had far back. This is what will make the film interesting, because we are making a film that depicts a journey back to the time when a good name meant a lot more than all the money in the world. Unlike what we have now when all that counts is the money. I don't think that any film tackles any issue in totality, it only lends its voice to the subject and this is what we intend to do.

What is the budget for the film?
The film has a budget of N120m, the bulk of the money going to what you will see on the screen.

Your budget is about the highest in the film making industry, how do you intend to recoup your investment and make some profit?

In the first instance, we are not just looking at Nigeria as our only market: the film is an international project; we hope to have an international release. On the international scene, N120m is still between the region of a million dollars, which is a relatively low budget film. I believe that with the right marketing mix, we should be able to recoup what we have invested.

How do you intend to manage big names like international designer Ade Bakare and gospel music sensation Jeremiah Gyang and the star actors all in one project?

The job of any producer-director is like of the orchestra conductor. I recognise this fact and this is why we are working with established names, people who understand what is to be demanded of at a certain level. So we will be having meetings, we discuss what is expected of them and they go and get it done. Films are a collaborative effort: I will not be working with them like their boss; I will be more of a coordinator. I think this approach will help keep the egos on check and work will go on smoothly.

Why did you settle for director and producer instead of acting which makes you famous?

From time I have always wanted to be a director. I admired those who work behind the scenes to make things happen and not those who are in it. I try to abide with terms of contract and to create an atmosphere that is conducive for work.

Twenty years on, how will you rate the Nigerian movie industry when you started out and its present state?

I think that the industry has come a long way since when I started. There has been tremendous growth. People who want to be different have gone on to do projects that are different. People who are just coming into the party (film industry) because they think it's something they can do too though they don't have much to offer have come in and fallen by the side.

By and large if I look at some of the films that are out today, there is an improvement in technicality and there is a little depth in the stories being told. Acting is one area which we need to improve on. There is also the need to grow the expertise of personnel for the new equipment being used in the film industry, this is why we are running an understudy and intern scheme on this project.

What has been your most exciting career moment?
Every time I am on set shooting, I am excited. Each time I bring a concept to live, I am excited. But most of all, I get the most excited when my films get premiered and you can watch to see the reaction of your audience and your colleagues.