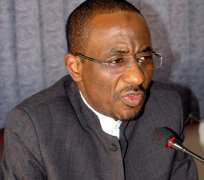 Central Bank Governor, Mallam Lamido Sanusi
With less than 79 days to the recapitalisation deadline given to the eight Deposit Money Banks rescued by the Central Bank of Nigeria in 2009, the banks have commenced intensive lobby of the apex bank to extend the deadline.

Our correspondent gathered from top sources in the banking sector that some of the DMBs, which were unlikely to meet the September 30 deadline, had started persuading the CBN Governor, Mr. Lamido Sanusi, to extend the deadline.

'The banks have bidders, who are ready to invest in them, even though not all the bidders are suitable. The banks are already recuperating from their huge losses, but the major problems with the banks, however, are the court cases, which are being sponsored by their former owners,' a reliable source, who craved anonymity because of the sensitive nature of the subject told our correspondent on Tuesday.

The source added that the bank executives were already talking with the CBN governor on the issue, but that their request had been turned down.

He noted that the issue would be extensively discussed at the next Bankers' Committee meeting.

It was also gathered from another source, who pleaded not to be mentioned because he was not permitted to speak officially on the matter, that some of the rescued banks might not escape the planned nationalisation of those that failed to meet the deadline if the CBN stood its ground.

'Some of the banks have not signed any Memorandum of Understanding, which means they are still talking to investors. The parties will still need to sign the Transaction Implementation Agreement, thereafter; they will now commence the process of a Scheme of Arrangement, which will be subject to necessary approvals from shareholders, regulatory authorities and the judiciary,' the source said.

The CBN had given the rescued banks till September 30 to seal up recapitalisation deals with new investors or face possible liquidation.

Sanusi had said, 'By September 30, it will be over two years since we intervened in these banks. And the CBN has allowed the shareholders and directors of these banks to pursue their recapitalisation by looking for their own partners.

'But some of these directors and shareholders are not cooperating. We introduced the Asset Management Corporation of Nigeria to inject capital into these banks, but some directors are averse to this. Then we asked them to look for partners, yet some of them are not cooperating. We cannot continue like this. Now, what is left for them is to either write a cheque for us or allow AMCON to inject liquidity.'

Meanwhile, two of the eight rescued banks have signed transaction implementation agreements with their core investors.

Access Bank Plc and Intercontinental Bank Plc, on Monday, announced that they had entered into legally binding terms for a proposed business combination with the signing of the TIA.

They said in a joint statement that the transaction would involve a Scheme of Agreement in accordance with the laws of the Federal Republic of Nigeria.

Two of the eight banks, Afribank Plc and FinBank Plc, have also signed MoU with core investors but are yet to sign the TIA, even though there are indications that the CBN may cancel Afribank's MoU due to the alleged questionable character of the potential investor.

Analysts have, however, expressed divergent views on the deadline.