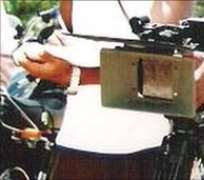 Kano, the main city in northern Nigeria, has a thriving film industry

Nigeria's final court of appeal has ruled that actress Rabi Ismail should be hanged for killing a male friend to acquire his property.

The Supreme Court upheld rulings by two lower courts that Ismail drugged and drowned Auwalu Ibrahim in 2002 in the northern city of Kano.

Executions have been rare in Nigeria since military rule ended in 1999.

The court ruled that Ismail drugged Ibrahim with a sweet, before drowning him in a dam in Kano.

Ismail's lawyers have exhausted all their options to acquit her, our reporter says.

The High Court and the Court of Appeal had earlier ruled that she was guilty of murder and should be executed.

She was not in court when the ruling was made and is believed to be in a prison in northern Nigeria.

Our reporter says lawyers he spoke to expect the ruling to be carried though, although the Nigerian authorities have rarely implemented the death sentence since democratic rule was restored in 1999.

Kano has a popular film industry known as Kannywood – the Hausa-language version of Nollywood in southern Nigeria.

In 2007, the state's Islamic authorities denounced the industry, saying it promoted immoral conduct.

Islamic clerics also burned copies of a film which portrayed a man who beat his wife and used prostitutes before changing his ways.