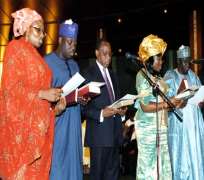 ABUJA, July 08, (THEWILL) – President Goodluck Ebele Jonathan Friday swore-in 17 federal Ministers of the 18 approved this week by the Senate, saying he would deliver a full address to them on Monday, the same day he said the Secretary to the Government of the Federation (SGF), Senator Anyim Pius Anyim will assign them portfolios.

The Managing Director of the World Bank, Dr (Mrs.) Okonjo-Iweala, who has been tipped to emerge finance minister, was the only nominee absent at the ceremony which held inside the Council Chambers of the Presidential Villa.

Presidency sources told THEWILL that she was in Washington DC to formally sign off from the World Bank before returning to Abuja to take the Oath of Office and resume at the Ministry of Finance.

President Jonathan however congratulated the Ministers, who were sworn-in in 3 batches for their appointments and wished them well.