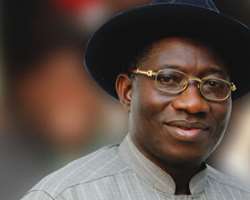 The list came precisely 29 days after Jonathan's inauguration and it was said to contain the names of 30 nominees.

Former Deputy Leader of the Senate, Senator Victor Ndoma-Egba, confirmed to one of our correspondents late on Monday that the Senate had received the list from the presidency. Ndoma-Egba, however, declined further comments on the grounds that the list was addressed to the Senate President, David Mark.

Mark is expected to read the list on the floor of the Senate on Tuesday (today) for the Senators to fix the time for the screening of the ministerial hopefuls, among whom are quite a number of ex-ministers.

The constitution empowers the upper legislative chamber to confirm ministerial nominees by the President.

Section 147 (2) of 1999 Federal Republic of Nigeria (With Amendments 2011) provides: Any appointment to the office of Minister of the Government of the Federation shall, if the nomination of any person to such office is confirmed by the Senate, be made by the President.

Curiously, the much-touted name of a former Minister of Finance under former President Olusegun Obasanjo, Dr. Ngozi Okonjo-Iweala, is said to be missing on the list.

Sources close to the presidency said Okonjo-Iweala's name was still pending because she had not reached an agreement with the President on the conditions she gave before she could accept ministerial offer in the Jonathan administration.

Though the Senate did not release the names of the nominees on the list, findings by THE PUNCH indicated that a number of ex-ministers under Jonathan made the list.

Meanwhile, a source in the presidency confided in one of our correspondents on Monday that the list sent to the Senate contained just the first batch of nominees. The source said a fresh list was submitted last Friday to security agencies for screening.

A major feature of the list of 30 to be presented to Senators today is that no politicians who lost election in the April poll made the list, thus confirming early speculations that Jonathan was not prepared to use the cabinet membership to compensate election losers.

Meanwhile, Okonjo-Iweala, who was said to have been pencilled in by Jonathan to supervise the finance ministry, was said to have met with the President before she travelled out of the country on Friday.

The Managing Director of the World Bank was said to have demanded that she should contribute to the appointment of heads of parastatals under the Ministry of Finance.

It was gathered that the former minister argued that her demands would be instrumental to her success in the appointment.

It was not clear whether her demands had been acceded to before she travelled out of the country on Friday night.

A source, however, said the 'World Bank woman has gone back 'to sort out things' with her employer before coming back to the country.

As the Senate officially announce the receipt of the ministerial nominees today, it is expected that the Jonathan's first full tenure would move on full throttle after a month of lull in government offices and behind the door politicking by party chieftains and influential Nigerians who wanted their anointed ones in the federal cabinet.

The Jonathan ministerial list had suffered delays and had been a subject of intense speculation as powerful individuals and groups mounted pressure on the President to take on their nominees.