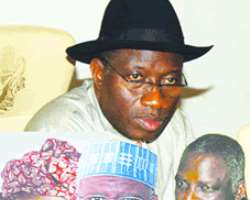 
Since the new administration was inaugurated on May 29, the calibre of people that would make President Goodluck Jonathan's cabinet has remained a major issue of public discourse. As is the tradition, the nation is literally standing still and has relapsed into a period of rumour and speculation. Among power brokers and politicians, lobbying for positions has been elevated to an art with all manner of tactics being deployed to capture the attention of the President who holds the aces.

Though Jonathan is likely to retain some who earlier worked with him, the expectation is that many of them would be shown the way out as the new administration settles down to work.

But the question is: will President Jonathan toe the path of his predecessors by recycling appointees or will the constitution of the new cabinet be a radical departure from the past?

For pessimists, nothing suggests that there is going to be a paradigm shift in the mode of appointing members of the cabinet. People with this ideological inclination believe in the saying of a great thinker, Veronica Lake, that 'Politicians, like the Chinese all look alike'. This school of thought perceives Jonathan as a leader who does not have the political will to change the status quo.

However, optimists reason otherwise considering that President Jonathan belongs to a new generation of progressive-minded politicians with the tendency to do things differently. Whatever happens, the Senate is expected to resume on Tuesday and would likely get the list of ministerial nominees on Monday, a day before resumption. Following his inability to name a cabinet barely a month after his inauguration, President Goodluck Jonathan has launched moves to persuade the Senate to cut short its recess and reconvene.

The Senate, after electing its principal officers, had proceeded on a three-week leave and is expected to reconvene on June 28 when it can now begin to screen the ministerial nominees. The president is said to be worried that his promise to form a cabinet within two weeks of inauguration has been hampered by the Senate recess.

But as Nigerians await the cabinet that would help President Jonathan pilot the ship of state in the next four years, many are tempted to put the political undercurrents in perspective. What are they?

Technocrats versus politicians
Each time a new cabinet is being constituted, there is usually the clamour to have more technocrats than politicians but it had never happened in the past. In most cases, politicians would always have their way. So, the question now is: will President Jonathan break the jinx of recycling leaders this time?

Already, the President is battling to stave off pressure from the Peoples Democratic Party (PDP) governors who are reportedly pushing their nominees for the cabinet.

According to political observers, Jonathan is insisting on merit to ensure that technocrats would form the bulk of those he would work with. For people in this school of thought, politics in the words of Charles de Gaulle, 'is too serious to be left to the politicians'. But the governors are not relenting in their push for core politicians and maintain that they should have a say on who represents their states. For the governors and other power brokers, what matters is their political interest and not that of the state.

There are feelers that part of the reasons for the delay in releasing the ministerial list is because the governors are determined to impose their nominees but the President is more concerned with meeting the aspirations of the majority of Nigerians.

Critical observers argue that Jonathan may have dropped majority of the state governors' ministerial nominees due to his resolve not to limit the appointments to politicians. It was learnt from sources in the presidency that the President might have decided to personally select people he believes have the capacity to properly implement his policy and programme and would not want to take chances by appointing governors' stooges.

War of godfathers
Even with the general elections over, the rivalry among political godfathers and power brokers is still on. In virtually all the states, the battle is no more about winning election but which camp would produce those that would make Jonathan's cabinet. In the South-south, the power tussle between foremost Ijaw leader, Senator Edwin Clark, and former chairman of the Board of Trustees (BoT) of the ruling Peoples Democratic Party (PDP), Chief Tony Anenih is getting hotter by the day.

The rivalry, which has caught the attention of President Jonathan, has created power blocs within the PDP in about four states of the South-south with the governors of the affected states inadvertently being caught in the political tussle between the two elders. According to political observers, the supremacy battle between both men is over ministerial nominees in their respective states and beyond.

There are indications that while Clark has been pushing for the reappointment of former Minister of State for Education and political foe of Governor Uduaghan, Kenneth Gbagi, the governor, with support reportedly coming from Anenih, has been pushing for the former governorship candidate of the Action Congress of Nigeria (ACN) in the last election, Chief Ovie Omo-Agege. In Oyo State, the war between the camp of the immediate past governor, Alao Akala and that of the former Senate leader, Teslim Folarin is not over and there has been a turmoil over who should make the ministerial list with many kicking against the purported nomination of Folarin.

The party at a press conference addressed by it's state secretary, Alhaji Bashiru Akanbi, accused Folarin and Lekan Balogun of ant-party activities. Also accused of working against the interest of the party are former Deputy Governor of the State, Alhaji Azeem Gbolarumi and a former Minister of Special Duties, Elder Wole Oyelese.

The situation is the same in Ogun where the power tussle between former President Olusegun Obasanjo and the immediate past governor, Gbenga Daniel has defied resolution. People are waiting to see whether Obasanjo would lose again in influencing who becomes Minister in Ogun having lost out in the state's power equation in the general election.

Familiar path
Characteristic of the nation's political class, many are afraid to leave the corridors of power and have succeeded in sustaining their relevance till date. Many argue that the situation has largely contributed to the near failure of leadership in the country.

'I know that there are two categories of lobbyists. There are those who lobby for ministerial positions for what I describe as personal reasons, either for themselves, their wives, their children, their in-laws, their brothers or their friends', he said. He claimed that only 10 per cent of the lobbyists genuinely wanted people who were not their relatives to be ministers.

All heads not equal
The ongoing effort by President Jonathan to constitute a new cabinet has also proved that all heads are not equal. It is surprising that even with the level of lobbying for Ministerial positions, there are still some people who would not jump at such an opportunity.

Indications emerged that Jonathan had indeed been lobbying some calibre of people to be members of his cabinet. For instance, for some people, it was cheering news that World Bank Managing Director, Mrs. Ngozi Okonjo-Iweala accepted a ministerial appointment to help salvage Nigeria's troubled economy. It was learnt that President Jonathan met with Okonjo-Iweala during his recent visit to the United States where he made the offer to her.The former minister was said to have been convinced to come on board by international lenders and financial institutions, following pressure from President Goodluck Jonathan's request.

But Mrs Okonjo-Iweala, it was learnt, demanded a free hand, among other conditions, from the President before joining the cabinet.

Mrs Okonjo-Iweala asked the President for free hand to operate within a functional system.

Mrs Okonjo-Iweala's conditions include efficiency, a free hand to redirect the economy, respect for her advice among others.

But Okonjo-Iweala's colleague and former minister of education, Mrs Oby Ezekwesili was reported to have turned the offer to serve in Jonathan's cabinet down.

So, while some are dying to be part of the incoming cabinet, others are not enthusiastic about it.