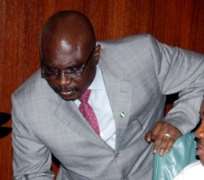 As agitated Nigerians and the international community worry over the inability of President Goodluck Jonathan to name his cabinet, advisers and other presidential aides, Abuja is buzzing with speculations and rumours of who is in and who is out of the president's list.

Despite President Jonathan's promise of hitting the ground running, when he was sworn-in last May 29, 2011, the President is yet to name his cabinet, and enquiries on his inability to announce his aides have taken a life of its own.

This position of authority as the President's 'gate-keeper' has had some people consider the Chief of Staff as the second most powerful man in Nigeria; a co-president' so to speak!       Mike Oghiadomhe had been replaced as Chief of Staff by Godknows Ighali; a career civil servant who was brought in to assist the President during the transition. Ighali, a permanent secretary in the Federal Ministry of Water Resources also served as Secretary to the Bayelsa State Government when President Jonathan was Governor of Bayelsa State.

Ighali is highly favoured in President Jonathan's home state and his Bayelsa kith and kin had hoped that the President will make his secondment to Aso Rock permanent.

To which end, a faceless group of Bayelsa elite had launched a campaign of 'Godknows Ighali for Chief of Staff' in the media. The said campaign involved planting paid stories in various news organs to the effect that President Jonathan had brought in Ighali to replace Oghiadomhe so as to bring undue pressure to bear on the President to make Ighali's temporal appointment as Chief of Staff permanent. Huhuonline.com could not independently verify whether or not Ighali himself hatched the sinister plot, which was said to be masterminded by a State House reporter (names withheld). It is alleged that the reporter in question handed huge chunks of cash to journalists whom he had drafted for the campaign at a nocturnal meeting.

But a source at Aso Rock told Huhuonline.com that, despite all the gesticulations, Ighali's appointment was just a temporary stop-gap measure. 'As political appointees, all aides of the president stop receiving wages on the day of the valedictory ceremony. President Jonathan seconded Mr. Ighali to the villa to help over see the day- to- day running of   his affairs, because he did not expect his aides to continue to work long hours without pay'. Hence, the reassignment of Mr. Ighali, a civil servant, who earns his wages as a permanent secretary, regardless of his place of assignment, was appropriate... It was just a temporary secondment, which some people had hoped will become permanent', said the source.

The source further noted that: 'during the presidential campaign and election period, many of the president`s staff were on the road, and did not see their wives and children for weeks. Mr. President expects his aides, particularly Mike Oghiadomhe, to use the transition period to rest and spend time with his family.'

Asked why most of the president's Senior Special Assistants, Special Assistants and other aides had not been named almost three weeks after his swearing-in; the source stated that, 'this is because of the new organogram of the State House coming.

Majority of the presidential aides in the new dispensation are of the Special Advisers status. So, President Jonathan wants to get the approval of the National Assembly before he announces them. And hopefully, the National Assembly will reconvene soon to tackle this and other issues.       'Efforts are on now to re-jig some offices, rename some, remove some and reorganise some.

The final meeting on the re-jigging was to take place on Thursday. The President looks forward to The Presidency that works better, that is highly mobile, flexible and result-oriented. He wants to have an improved structure from the one he inherited and has been using since he was sworn in last year (May 6).'

The source insisted that President Jonathan was working hard for Nigeria and advancing his agenda. And that the moment the Senate reconvened and approved his request for Ministers and Special Advisers, the shape of the government would fall into shape and the implementation of his agenda would 'hit the ground running.'