IMOKE'S PROMISES AND JOURNEY SO FAR 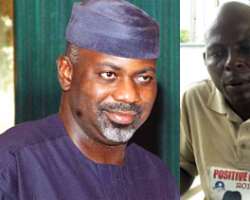 Cross River State Governor, Liyel Imoke, will contest the governorship poll in the state for a second term in 2012. MUDIAGA AFFE writes on the performances of the governor and the views of the opposition in the state. In the last four years, the Governor Liyel Imoke administration in Cross River State has been saddled with the responsibility of managing the state's resources in oder to put smiles on the faces of Cross Riverians. But while majority of the projects are ongoing, with few of them already completed, the job of successfully finishing some of these projects before the expiration of this administration in August 2012, has become a Herculean task.

While the Imoke administration might have ventured into so many areas that will impact on the economic wellbeing of the state and make it a hub in the South-South region with its slightly over N2bn monthly allocation from the federation account, some opposition party leaders have blamed the government for not looking inwards by improving on its Internally Generated Revenue which is slightly over N700m.

The governor, no doubt, might have had high hopes when he took over the mantle of leadership in the state in May 2007. He has, however, remained focused despite the boundary adjustment by the National Boundary Commission and the Revenue Mobilisation, Allocation and Fiscal Commission that handed over the 76 oil wells which used to belong to the state and qualified her to enjoy the benefits from the 13 per cent derivation to the neighbouring Akwa Ibom State.

During his electioneering, Imoke promised that his government would not be for the elite but for those who do not have the wherewithal to provide for their needs.

For instance, the administration has taken a bold step to reposition the health sector in fulfilment of Imoke's promise during his maiden speech in 2007 when he came on board. He said then that healthcare delivery would be a priority and that every citizen of the state would be entitled to health security at subsidised rates.

He embarked on the strengthening of the primary healthcare system believing that it is the foundation for secondary and tertiary Medicare. His administration has constructed 66 new Primary Health Care centres and upgraded 130 existing ones. Each electoral ward has one well-equipped Primary Health Centre. Besides, the administration has renovated 16 general hospitals and also constructed six new ones.

The government is embarking on the establishment of an international state-of-the art referral hospital in Calabar to promote health tourism. Healthcare delivery has also been strengthened with the establishment of the Dr. Lawrence Henshaw Memorial Hospital and Specialist centre with a Polymerase Chain Reaction Laboratory, the second in Africa. The centre provides treatment for tuberculosis and other infectious diseases.

Significantly, the state has recorded universal coverage of two insecticide treated mosquito nets per household under the roll-back-malaria programme. The government is also collaborating with MTN to set up a Renal Dialysis Centre and with Tulsi Chanrai Foundation for delivery of community health in four local government areas of the state.

The state has implemented a social security programme known as 'Project Hope' which is a free health initiative for pregnant women and children under five years of age and Project Comfort, which is a conditional cash transfer programme for very poor homes.

This was instituted as a poverty alleviation strategy for the most vulnerable people and families in the society. The second enrolment of beneficiaries through a biometric process has been completed and about 128,427 people have been enrolled for the free Medicare, while 2,231 households are being serviced under the Conditional Cash Transfer programme.

In the area of rural roads, projects are supervised by the Rural Development Agency and the Cross River Rural Access and Mobility Project. RUDA constructs rural roads and provides infrastructure like classrooms and health, while CR-RAMP is strictly for rural roads. About 30 roads of over 500 kilometres are being constructed and they are spread across 16 of the 18 local government areas gulping N8bn. The rural roads have a combined total of 19 bridges of 746 meters span and all these have reached about 80 per cent completion.

The administration has also signed a contract agreement for the construction of 474 kilometres of rural roads valued at N20.325bn to cover 28 communities across the state under CR-RAMP. This led to the signing of the main and subsidiary loan agreement between the Federal Ministry of Finance and African Development Bank. Under the arrangement, the ADB is to contribute N7.016bn, comprising 34.5 per cent of the total civil works, while the remaining cost of N13.308bn or 65.48 per cent will be contributed by the state government.

In the area of electrification, 67 projects have been embarked on by the administration in 102 communities and in March this year, 23 sites were completed and inaugurated and another 10 have been completed and are waiting to be inaugurated, while the remaining ones are at various stages of completion.

But despite these projects, it is on record that the state has remained one of those in the federation with huge debt profile of about N80bn.

She said, 'This state is blessed with several natural resources which many nations depend on. We have cocoa. People from Ondo State and much of the western states, including Anambra State come to Ikom in Cross River to buy cocoa and take it back and export to other countries. The accruable incentives do not come to our state, because we are not known as a cocoa producing state.

'Ivory Coast entirely depends on cocoa as the economic mainstay, and yet in Cross River it is just one of the many resources we have. Palm fruit which Malaysia also depends on, is another of our many resources. Are we talking about limestone, granite or rice? Sugarcane for bio fuel, or rivers in the three senatorial districts for agricultural products?

'In one senatorial district alone, you could have Public-Private-Partnership. Borrowing money is no longer fashionable. It is time to pursue PPP in this day and age. You give equity of what you have, like land, expatriate quota for those coming in with their technology for the riverine areas. Rice can be planted, and it takes only four months to harvest. An integrated agriculture industry that can create 1300 jobs for youths and the unemployed could be the way out.'

Also, the state chairman of the Action Congress of Nigeria, Mr. Cletus Obun, did not agree that the state government had done well in the areas of health, education and rural infrastructure.

But the state Commissioner for Information and Orientation, Mr. Patrick Ugbe, disagreed, saying Imoke had propelled the administration to progress.

'It is on record and a positive development that since the inception of Imoke's administration, he has never owed workers. Pension and gratuity are paid to those who have retired from the state civil service,' Ugbe said.

He said, 'To ensure that we deliver the dividends of democracy to the citizenry, this administration has placed much emphasis on the Public Private Partnership and cooperation with the international development agencies to execute projects. As an alternative to the loss of the oil wells in the state, the state has concentrated on the development of the tourism sector which has placed Cross River as the tourism hub of Nigeria and the destination that international tourists aspire to behold.

'The governor has displayed a great sense of humility and prudence in handling the affairs of the people and management of their resources.'

Before 2008, Cross River State benefited from oil derivation as a result of the oil in Bakassi, but the oil rich island was finally handed over to the Republic of Cameroon on August 14, 2008 in compliance with the October 10, 2002 judgment delivered by the International Court of Justice in the Hague.

This led to the adjustment of the territorial boundary between Nigeria and the Cameroon by the NBC and RMAFC that removed Cross River as a littoral state and on doing that Akwa Ibom State became a beneficiary of the action.