WHY MIKEL FLOPPED IN CHELSEA -EMENALO 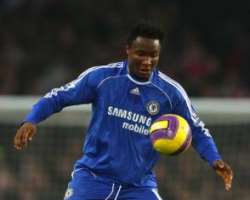 Chelsea's assistant coach, Michael Emenalo, has explained why the club's defender midfielder, John Mikel Obi, failed to perform to expectation this season, noting that the Nigerian international and his team mates played under immense pressure.

The Nigerian former international, Michael Emenalo, who joined English Premier League giants, Chelsea, in 2007 as a chief scout, but quickly rose through the ranks to become an assistant first team coach after earning trust from club's owner, Roman Abramovic, insists that but for the pressure, things would have been much better for the club.

The 45-year-old UE Lleida's former defender and graduate of Boston University in the USA told Goal.com that severe pressure from within and outside the club played a key role in the performance of the team in the just concluded season.

'Undue pressure from within and outside the club contributed to the nostalgia about us, losing our prestige, but once we noticed where the problem was from, we just checkmated it and the rest is history. And as for why many Chelsea players underperformed this season like was the case with Michael Essien, Florent Malouda, John Obi Mikel, coach Emenalo said: 'High expectations from fans and management made them play the way they played, in the sense that they didn't perform as usual because they were playing under pressure.'

On why the club's big buy of the season, Fernando Torres, is still struggling at Chelsea since his arrival, Emenalo said that the Spainard was still adapting to the pattern of Chelsea at the moment, owing to the fact that he's still missing the juicy passes being served to him by the likes of [Xabi] Alonso and [Steven] Gerard, but with time he will adapt.

Speaking on Didier Drogba and his future at the club with Ancelotti gone, the member of the 1994 Super Eagles team to the FIFA World Cup said that he was sure the Ivoiren would remain with Chelsea and that for him personally, he is looking up to God and the club's owner, Roman Abramovic. 'It is in the hands of God Almighty and Roman Abramovic, the owner of the club.

While congratulating Barcelona on its Champions League victory, he said Chelsea would have done better. 'The English representation of Barcelona can be likened to that of Arsenal FC in the sense that a better way to checkmate the excess of such free flow of football is trying your possible best to force the team to play your pattern, which can be achieved by being more physical in your approach to the game.

The likes of Inter Milan that is more physical applied that principle and overcame Barcelona the last time both sides met. I strongly believe that our physicality could have helped us checkmate such excesses.'