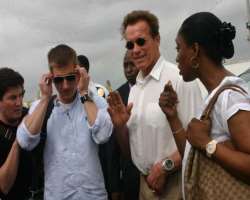 FORMER CALIFORNIA GOVERNOR, MR ARNOLD SCHWARZENEGGER WITH AIDES AT THE PRESIDENTIAL WING OF THE MURTALA MUHAMMED INTERNATIONAL AIRPORT LAGOS A FEW MONTHS AGO.
Listen to article

One of the ironies of extramarital affairs is that many people condemn it, yet, many more engage in it. Such relationship, sometimes called adultery, can be complicated. And different people engage in it for different reasons. The duration for such liaison can be as short as one day, or as along as a year or many years. Depending on the character, the expectation and the worldview of the aggrieved, such dalliances, whether it becomes public knowledge or not, can be painful. But it need not be.

Different people deal with marital infidelity in different ways: seek divorce, accept or come to terms with it, or extract revenge by having affairs of their own. Even without the benefit of data set, one can infer that adultery – which may or may not lead to a love-child – is common in all cultures and with all races and religious orientation. Even so, as common as adultery is in the United States, a portion of the society seemed taken aback when it became public knowledge that Arnold Schwarzenegger – the movie star, two-time governor of California and husband of Maria Shriver – had fathered a child outside of marriage.

And although a second segment seemed staggered, it quickly came to terms with the fact that adultery, and the issue of a love-child, is part of the human experience. Married or not, some folks have the insatiable need for sexual variety. And even though the major religions of the world seem to forbid adultery, it has not stopped men, and women, from engaging in it. Be it in Nigeria, the UK or elsewhere around the Christian world, sex-related scandals are common. Some religious leaders have been known to have sex with members of their sect; and in extreme cases, some do sexually abuse minors. What this tells us is that a lot of people “are doing it.” It seems then that there is nothing religion forbids that mankind will not joyfully do, including fornication and adultery. And frankly, very few things in life have control over a man, or women, as sex.

Insofar as the Arnold Schwarzenegger and Maria Shriver’s case is concerned, more than three dozen national commentators, and religious folks, have condemned him. However, not many, in my circle of friends and acquaintances, think he committed an unforgivable sin, or that he violated some deeply held social contract. If Arnold Schwarzenegger was a Nigerian, Kenyan, Ugandan or a Cameroonian, this would not have been an issue he’d fret or worry about. And for that matter, the Bill Clinton-Monica Lewinsky case would not have seen the daylight. As an extension of this train of thought, how many sitting or former presidents, ministers, governors and other high ranking public servants and private officials (in Africa) does not have a mistress or concubine or a child outside of marriage?

That men and women venture outside of their matrimonial homes is as old as human history. In other words, there is nothing terribly sacrilegious about Schwarzenegger’s behavior. Sure, a few egos may have been bruised; but really, Arnold simply travelled the path many have been traveling for ages. Sure, one may wonder, “What more does Arnold wants…Maria is pretty and rich, educated and professionally accomplished … what more can a man ask for?” Those who ask such questions are naïve and are missing the point. Most men venture out, not because their women lack these fine attributes. No. Most men simply want something extra, and something different to add to whatever it is they already have or don’t have. That they romance another woman does not mean they want to abandon the marriage, or that they are no longer in love with their spouses.

What I get a kick out of is Arnold Schwarzenegger’s bravo and hubris. That he was able to get away with it for so long is simply amazing. He sustained his act for about a decade under his wife’s nose, and within the glare of the California and national media? Damn, he’s got balls! I wonder what behavioral analysts would say about such a man.

A slight digression here: I usually advise my female friends not to leave or divorce their husbands simply because of adultery. Oh no! “You may leave your husband if he is physically or mentally abusive, or because of some other extreme and injurious behavior -- but definitely not because of adultery. Who is to say that the next fellow you marry will not look for extracurricular activities elsewhere. What’s the solution? If your husband cheats on you, you find yourself a lover…the younger the better.” If your husband is screwing around, what’s your rationale for being faithful to him?

Now, insofar as having a love-child is concerned, most of us only pay attention if the love-child belongs to the man (as is the case with Schwarzenegger). On the other spectrum are women who get impregnated by their lovers, but then credit their husbands with the pregnancies and the kids. In societies where DNA test are not very common, it is likely that about ten percent of men are claiming children that are not biologically theirs. And even in societies where such tests are readily available, not enough men pay attention to the possibility that their child may not be biologically theirs. When a man has 2-10 wives, can he reasonably expect all of them to be faithful? When a man has10-50 children, can he reasonably expect that all the children are his biological children? On both questions, I’d say no… Hell no!

After all these years – and more so in the US, Latin America, Canada and the UK-- I have never met a man, or woman, who will not engage in extramarital affairs if there is a firm promise of secrecy. I have never met a man or woman who will not venture out to seek thrills if he/she knew that such liaison will not become scandalous. Given the opportunity, and under the right circumstance, anyone would cheat. Men do it, women do it. Ok, you may argue that not one hundred percent of married couples have, or will ever commit adultery, still, more than fifty percent of all married couples will seek or have sought sexual pleasure and forbidden excitement outside of marriage. And if you do it once without being caught, you are likely to do it again and again and again. Adultery can be addictive.

Arnold Schwarzenegger, from the get-go, has always been a lady’s man. He went on to become rich, famous, and powerful. That women threw themselves at him was well known. That he sought their company was also well known. Why anyone thought he would change after his marriage baffles me. Even after he became the governor of California, not much changed. And so, whatever Arnold wanted, Arnold got. At this point, no one can make a definitive statement about what will happen to his marriage, his reputation and his career. What seems clear is this: a divorce may be in the works, but the American public will soon forgive him and move on in which case, his movie career will not suffer much. By the way: If Maria Shriver divorces him, who is to say that the next man who comes along will not cheat on her? Adultery is like lying or planning a coup: you may do it, just don’t get caught.

Sabella Abidde is on Facebook and can also be reached at: [email protected]